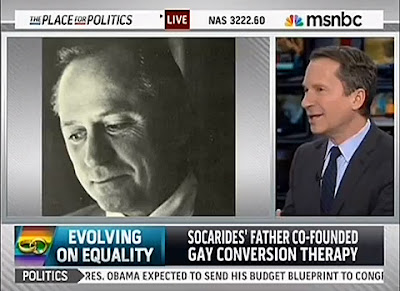 In July 2008, after the New Yorker ran a controversial cover of cartoon Barack and Michelle Obama, she with a rifle slung over her shoulder and he dressed up in Muslim garb, I learned the magazine does not prohibit the editorial staff from donating to politicians. The magazine's Hendrick Hertzberg linked to my blog post about his New Yorker colleagues giving almost $5,000 to Obama's presidential campaign.

My concern about bloggers and old media folks donating to campaigns is not that they're writing checks, but that they're not disclosing the giving or the amounts. All I ask for is transparency. Well, I ain't getting it from David Remnick at the New Yorker.

Back in May, the very ethically-challenged our gay former special assistant to President Bill Clinton when DOMA was signed into law, Richard Socarides, wrote a naive post at his New Yorker blog, which I missed at the time:

Oh, really? Did Socarides sing Kumbaya too many times? How else to explain his contention that crimes are magically supposed to stop because of gay marriage laws:

Many are asking how this was possible in the same month that the legislatures in three states (Rhode Island, Delaware, and Minnesota) joined nine others in enacting same-sex marriage laws.

Don't include me in that vague "many". I'm not fool enough to think hatred against fags and dykes and trannies and switch-hitters disappears with laws added to the books. But the most irritating contention of Socarides' is this:

Indeed, how could these crimes—targeting not just individuals but New York’s gay community in general, as crimes of hate are intended to do—be rising along with the political reality that a lesbian elected official, City Council Speaker Christine Quinn, is the front-runner to be the next New York City mayor?

As if a corrupt Democratic politician who happens to be lesbian and uses sharp claws to ascend up the New York City political food-chain potentially to replace her buddy Mayor Michael Bloomberg at City Hall, is the answer to how to end bias motivated assaults and killings.

On top of that, Socarides made no mention of donating $635 to Quinn's mayoral bid. It's no surprise one A-Gay Democrat is giving to another, but that does not absolve Remnick and the New Yorker from being transparent about its writers' donations to politicians they write about.

A disclosure should be added to Socarides' post.
Posted by Unknown at 5:27 PM
Email ThisBlogThis!Share to TwitterShare to FacebookShare to Pinterest