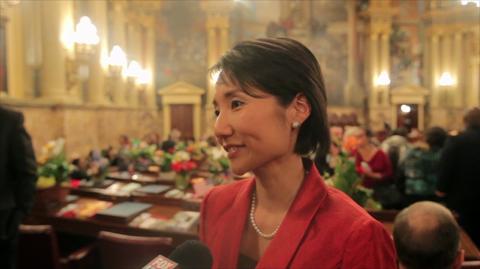 Thanks to a news item by Frank Pizzoli and his terrific Central Voice LGBT newspaper in the Harrisburg, Pennsylvania, area, I learned that state Representative Patty Kim, pictured, recently posted her office expense reports for 2012 and 2013 on her official web site.

This act of transparency piqued my curiosity about whether the Keystone State mandates such transparency, so I asked Ms. Brooke Wheeler, the Right to Know Law administrator for the state House of Representatives for more info. Wheeler replied:

Pennsylvania House Members are not required by law to post their electronic expense reports to their websites. They are required by Rule 14 of the House Rules (as well as the PA Right-to-Know Law) to make them available to the public upon request, but not to post them online.

Some Members opt to post them online out of an interest in additional transparency for their constituents. I do not have a list of Members that post online, and I am not aware that such a list exists. Our Right-to-Know Law requires us to make Members’ electronic expense reports available to the public via Right-to-Know Law request, which we do. You can learn more about how the PA Right-to-Know Law relates to the House of Representatives on our website.

A quick Googling shows a good number of representatives, Democrats and Republicans, voluntarily share their expense reports on their official web sites, and I say bravo to them. Wheeler also explained the full scope of this law:

Let's laud Pennsylvania for this sunshining programs and salute the many lawmakers in Harrisburg, the state capitol, who voluntarily post their monthly office expense reports on their sites. It's a shining example of what I'd like to see from elected officials in Sacramento and at City Hall in San Francisco.

Posted by Unknown at 12:38 PM
Email ThisBlogThis!Share to TwitterShare to FacebookShare to Pinterest