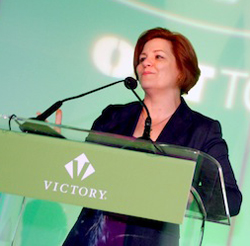 (Quinn at an April fundraiser for her in DC organized by the Victory Fund. Credit: Ward Morrison, Metro Weekly)

A complaint has been filed with the New York City Campaign Finance Board seeking an investigation into mayoral candidate Christine Quinn’s decision to accept travel-expense reimbursements from a national political action committee for a series of fundraising trips.

“Ms. Quinn may have broken both the letter and the spirit of New York City campaign finance laws when she participated in fundraisers for both the Gay & Lesbian Victory Fund and her own mayoral campaign,” wrote Garfield Heslop, a Brooklyn attorney, in a complaint to the board dated June 24. The complaint cites a June 12 story in The Wall Street Journal about the trips and requests the board launch a probe to “bring light to a series of troubling questions facing Speaker Quinn and her fundraising activities.” [...]

Good to see the WSJ bringing transparency to Quinn's public filings and this complaint, and for lots of background on her from a queer activist and accountability perspective, visit the Christine Quinn Sold Out blog maintained by Louis Flores. There can never be too much scrutiny of this lesbian Democrat or any LGBT elected official.
Posted by Unknown at 11:39 PM
Email ThisBlogThis!Share to TwitterShare to FacebookShare to Pinterest