GMHC: Weiner Sexting Presser At Our Office Not an Endorsement 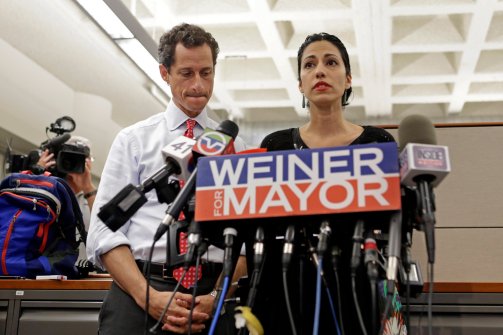 New York City mayoral wannabe Anthony Weiner and his wife Huma Abedin yesterday met with a horde of reporters, camera people and bloggers yesterday to discuss his sexting activity. They did so inside the offices of the AIDS service organization Gay Men's Health Crisis in Chelsea.

Weiner was at the agency because it was holding a candidates' forum about HIV issues soon after the presser.

Concerned that the AIDS nonprofit allowed its space to be used in such a partisan political fashion, with the candidate's campaign setting up a podium inside GMHC with his Weiner for Mayor sign on it, instead of having the event on the public sidewalk, I asked the agency's spokeswoman Krishna Stone for clarification.

On behalf of Seth Rosen, director of GMHC's communications department, this statement was sent to me:

GMHC was contacted by staff members in Mr. Weiner’s campaign office to request a non-descript space in which to hold the press conference. They anticipated the voluminous amount of press that would want to cover the conference and knew that being outside in front of our offices would not work.

In fact, there were protesters from ACTUP who were raising awareness about post-exposure prophylaxis (PEP) and groups of campaign supporters in front and on both sides of our entrance.

There was a window of 30 minutes in which the conference could be held before the mayoral candidate forum. Mr. Weiner arrived to an area in our offices that did not have any GMHC signage.

We were careful to make clear we are not endorsing the campaign. After the conference, we were able to start the forum.

The majority of the media who attended the conference actually stayed for the forum which was beneficial as the candidates discussed the critical issues of HIV and AIDS.

As a 501C3 non-profit organization, we remain committed to not endorsing any candidates.

I have requested that GMHC send out the statement to its full media list and to also post it to their page for press releases. The agency must share the clarification and explanation far and wide. In the future, I hope GMHC will not allow any politician to stage such events on their private property.

Finally, I'm very pleased to learn members of ACT UP were picketing outside the forum calling much-needed attention to HIV prevention issues such as PEP.
Posted by Unknown at 1:17 PM
Email ThisBlogThis!Share to TwitterShare to FacebookShare to Pinterest