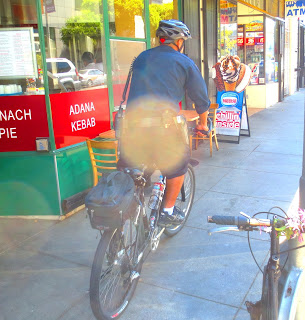 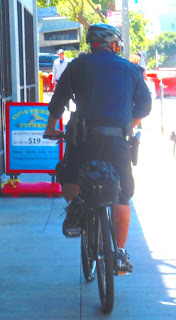 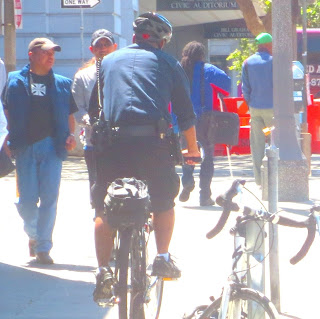 Too many sidewalks downtown and around the city are plagued with bicyclists riding in an area that's supposed to be reserved for pedestrians. It's not as if bikers don't have wide lanes on the streets dedicated for them and they have to use the sidewalks to get around.

Average citizens aren't the only bikers who break the law and ride on the sidewalks. Bike cops can frequently be seen on Mission Street sidewalks near the Yerba Buena/Metreon complex and Market Street from 5th to Polk Streets.

On Wednesday afternoon, I had just finished lunch at the Turkish restaurant on Grove Street opposite the main library's entrance when a cop on a bike came riding up the sidewalk from Hyde toward Larkin. He ignored the pedestrians and tight space on the narrow strip of sidewalk, peddling away and looking for criminals. One was reflected in the store windows as he rode by.

Even the SF Bike Coalition, a group not known for wagging a finger at errant bikers, is publicly opposed to bikers riding on sidewalks and the group says so on its web site, and also cites the law about this:

[In] San Francisco it's against the law for anyone 13 years of age and older to ride a bicycle on the sidewalk. SF Transportation Code (SFTC) Sec. 7.2.12 forbids sidewalk bicycle riding, while Sec. 1007 states "children under the age of 13 may ride a bicycle on any sidewalk except as otherwise posted". [...]

The San Francisco Bicycle Coalition is sometimes contacted by people who feel threatened by and are angry with people who ride bicycles on the sidewalk. Our position is clear that sidewalks are for people to walk.

With so many bike lanes in the streets, there is no reason for bicyclists including police officers to be riding on the sidewalks.
Posted by Unknown at 9:55 AM
Email ThisBlogThis!Share to TwitterShare to FacebookShare to Pinterest

Thanks, Mike! I'm memorizing the SF Transportation Code number that you cited. Next time I see a bicycle cop riding on the sidewalk I'll back up my complaint to him or her with an actual reference to the law.