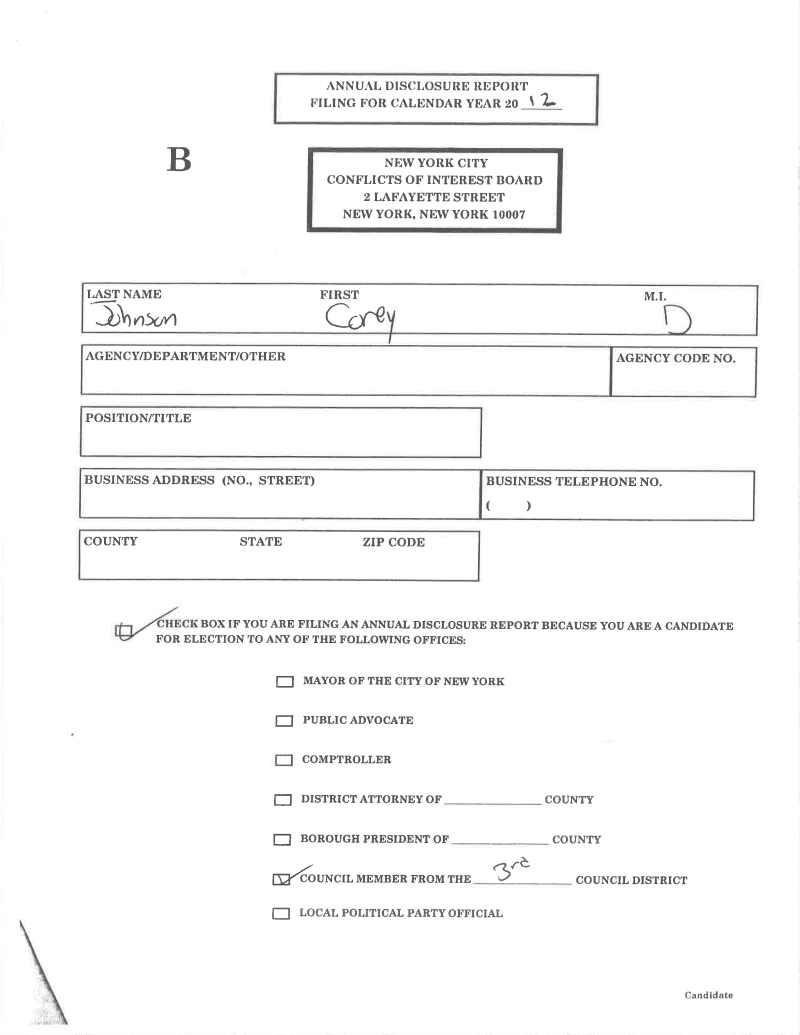 To obtain a New York City politician's financial disclosures on file with the Conflicts of Interest Board, which are public records, the law requires you to provide them with a copy of your photo ID which is passed along to the politician along with your request. In my decades of filing for public documents, I've never experienced this requirement.

The COIB does not post the annual disclosures on its web site, however, for New York State legislators and statewide elected officials their financial disclosures are just a few clicks away at the Joint Commission on Public Ethics. Albany, one of the most dysfunctional capitals in America, is more transparent than New York City on politicians financial filings. Go figure.

I wonder if Corey Johnson, who is running for the District 3 seat of the NYC City Council, will come out in support of mandating COIB post the disclosures of all NYC electeds on their web site. That would make it easier for citizens to follow the money.

After jumping through COIB's hoops, I've obtained Johnson's only disclosures with the agency for 2011, posted here at my Google docs page, and 2012, which is here. The entire disclosures can be read at the links.

One thing stood out. In the 2011 disclosure, the question asked is: "Do you or your spouse/registered domestic partner or your unemancipated child personally (NOT through a corporation or partnership) currently own, rent to anyone or rent from anyone any residential, commercial, retail, or industrial real property in the City of New York?"

Johnson checked no as his answer and I wonder how he can claim he doesn't own or rent his apartment from anyone. Does he have a sweetheart deal with a developer or real estate firm? This something I believe his campaign should clarify. 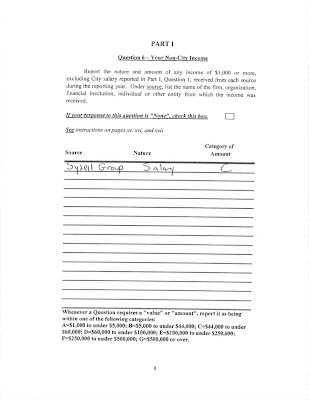 The 2012 disclosure shows Johnson received a salary between $44,000 and $60,000 from the Sydell Group, which describes itself as a New York based owner and developer of lifestyle oriented hotels.

Check out the 2011 and 2012 financial disclosures, and help bring more transparency to Johnson and his campaign.
Posted by Unknown at 10:53 AM
Email ThisBlogThis!Share to TwitterShare to FacebookShare to Pinterest

GFI and Sydell are essentially the same thing. They are owned by the two partners on the Ace Hotel, where Johnson helped to displace SRO tenants. While the two partners sued each other, Sydell still manages the hotel, and according to Johnson's own web site, he still works for Sydell.