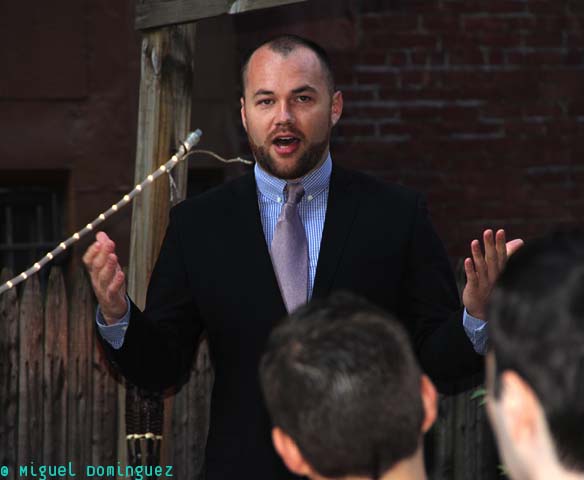 This past Sunday, I submitted these easy questions to out Democratic politician Corey Johnson who is chair of Manhattan's Community Board 4 for the Westside including the Village and Chelsea gayborhoods and is seeking to replace Christine Quinn on the City Council for district 3.

The questions were submitted to his campaign team and ignored. No reply was sent to me. However, my questions about the missing minutes at the CB4's site seems to have forced Johnson and the board to get their site up to speed and fully transparent yesterday.

As a high-profile gay candidate in America's biggest city, I think Johnson should address these transparency matters and clearly state his agenda to expand transparency at NYC departments and for members of all elected and advisory councils, boards and committees that comprise City government:

1. Is Corey willing to post on his campaign site all of his disclosure filings since 2005, when he was appointed to Community Board 4, that he's made to the Conflict of Interest Board? As a candidate, let me know if has a plan to expand transparency by proposing a law requiring online disclosure of the filing at COIB's site.

2. What about linking from the campaign site to his list of donors and expense reports over at the Campaign Finance Board's site, and assisting voters in following the money? Voters need to be educated about campaign finance and told by candidates where such reports are located online. Please explain how Corey engages voters to read his campaign's public filings and if he will cross-post his COIB filings on his campaign site.

3. The CB4 monthly minutes are current only up to December 2011, and minutes from January 2012 through April 2013 should be on the board's site as basic government transparency. Why has Corey not rectified sixteen months of omitted minutes from the CB4 of which he's chair? This is quite an excessive amount of time for minutes to not be made available to the public. When does he expect the missing minutes to be up at the board's site? [UPDATE: The CB4 site now includes the minutes.]

4. Once those minutes are up, will Corey's campaign site link to them and all resolutions passed by the board? Making it easy as possible for voters and old and new media writers is vital.

5. Share with me Corey's agenda, if elected, for expanding NYC government transparency at the City Council, for the Mayor and all departments and agencies?

6. I've filed a complaint with the City Clerk's Lobbying Bureau stating that I believe Corey should have registered as a lobbyist when he was government affairs director for the GFI Development Corporation. Why didn't he register as a lobbyist during the years he served in this position for the real estate giant with much business with the city? Greater details about this lack of registration are needed, as are details about his duties as director of this important function for GFI and if those duties would be cause for Corey to recuse himself from matters related to GFI that may come before the City Council, if he wins the seat?

7. Regarding any gifts of travel or of value at $50 or above received since 2005 when he was appointed to CB4 and began serving as a public official with hands on levers of power, I'd like to know if he has received such gifts. If so, has he disclosed them and are the disclosures publicly available, and will he post them on his campaign site? On the other hand, if no gifts have been received by Corey during these years, that should be stated on his site.

8. If elected, will he propose a law requiring an additional string to nonprofits receiving taxpayer dollars, a requirement that groups accepting $250,000 or more in municipal funds post their three most current IRS 990 tax filings on their web sites? Such a legal mandate would assist the public in following city funds that flow to thousands of nonprofits across the five boroughs. Please provide details about Corey's plans to make such nonprofits more transparent.

9. Here in San Francisco, I was part of the coalition that successfully passed the Nonprofit Public Access Ordinance requiring any nonprofit receiving $250,000 or more to hold at least two board meetings open to the general public, except abortion and domestic violence groups. The law is posted here. If elected, will Corey work to create a New York City version of this law?
Posted by Unknown at 6:42 PM
Email ThisBlogThis!Share to TwitterShare to FacebookShare to Pinterest