She didn't cooperate. Mother Nature failed to deliver a solid hour of sunshine for the Dore Alley Fair yesterday, as Queer Law requires. The chilled wind, gray fog and overcast sky all conspired to put a damper on the kink and nudity.

I give the 2013 edition of Up Your Alley, on a scale of 1-to-10, a strong 7 rating for the fair over all and the dudes and dudettes who made it happen by showing up, and a solid 10 for attitude and vibes, not to mention music that didn't deafen or irritate my ears.

Thumbs up to the clean up crew for getting in their positions at the appointed end-time of 6 pm, orange vests and gray gloves on everyone, brooms in hand, and not blowing loudly on their whistles signaling the closure of the fair. The fair was considerably thinned out by then and most folks know the drill that the sweeping begins promptly at 6 pm, so their was no need to get assertive. Nice touch! 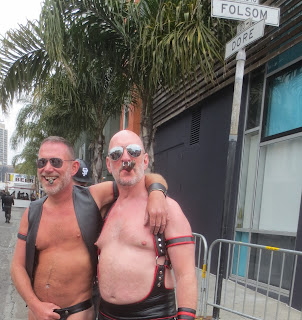 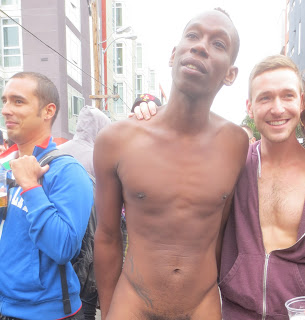 Black and white wieners were on display, but due to Blogger policies they are not shown here.

An ebony-and-ivory version of Twister courtesy of the Berkeley's Steamworks bathhouse. 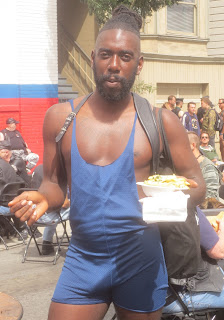 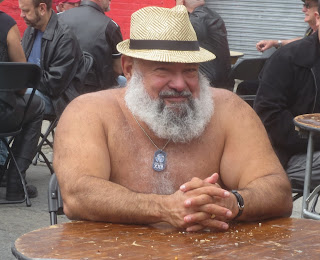 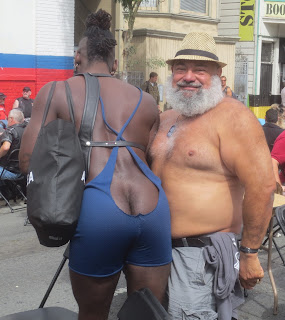 During a ten minute show of orange sunshine, these two dudes showed the hots for each other and a few of us appreciating them and snapping pix. 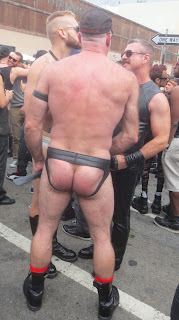 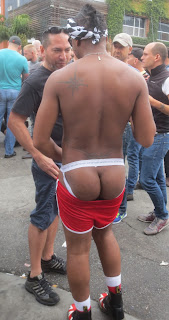 Is the theme of this pix series black-and-white or what? White butt, okay red from getting spanked, in a black jock strap, and a young black butt wearing a white athletic supporter. 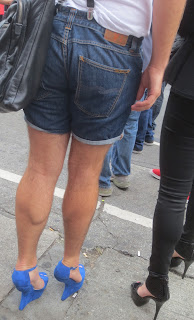 The pair of legs on a man belonged to this fella in the blue high heels that brought out the best of his calves. Vive "Laurence Anyways"! 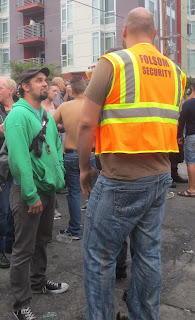 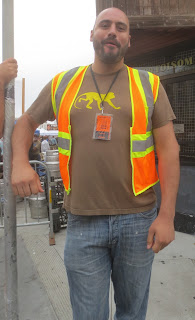 This young gentle giant bear drew lots of loving gazes, as he worked security at the gate and inside the fair. There were many guys, myself included, like the man in the green sweatshirt, happy to look up at this big bear with lewd and lascivious thoughts. Great deep voice on him. 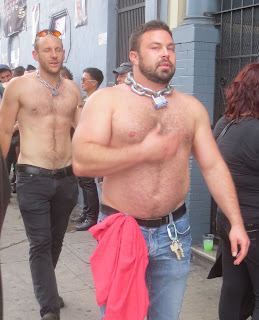 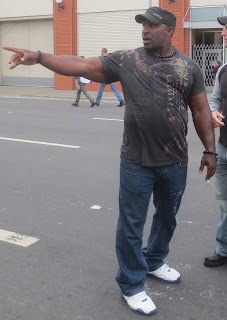 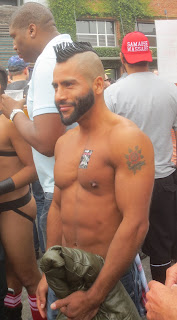 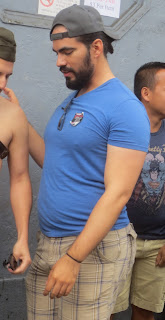 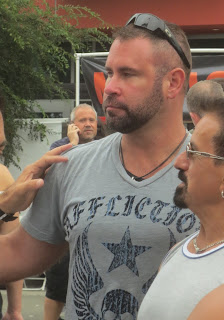 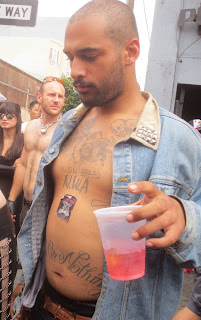 Just a few more of the attractive dudes who caught my queer eye. The one with the very spikey Mohawk cut always had someone snapping his photo whenever I saw him. 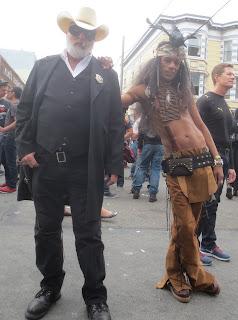 Kudos to the queers and fetishists of all stripes who let it all hang out, the volunteers and security of Folsom Street Events and the people staffing the booths. Let's hope Folsom Street Fair has warmer weather and lots of sunshine!
Posted by Unknown at 10:59 PM
Email ThisBlogThis!Share to TwitterShare to FacebookShare to Pinterest