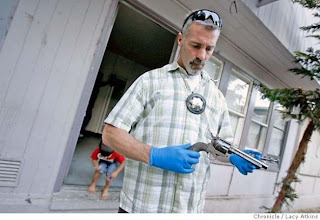 (Lenny Broberg in 2007 holding a gun and knife found in the home of an individual on probation. Credit: Lacy Atkins, SF Chronicle.)

The Bay Area Reporter last week wrote about out police officer Lenny Broberg's many complaints regarding security and two people harmed by gun-related violence at the SF Pride celebration in Civic Center on June 30:

Broberg questioned the San Francisco LGBT Pride Celebration Committee's security practices and criticized the group's top officials for not responding to the incident [...]

"I know there were a lot of cops out there," Broberg said [speaking as a private citizen and not on behalf the of the SF Police Department], but "you have to do something else to control the crowd."

He suggested charging admission for Pride, an idea dismissed by Pride officials for years as they've sought to keep the festivities free. "I appreciate the fact that they like to make it open to everybody," Broberg said, but referring to "youngsters," he said, "I was standing at the gates" for Pink Saturday and Pride, and "they're just walking through. If you can't even donate a dollar to the party, then there's something wrong. You're not respecting what we're trying to provide. If you can't support it with a dollar, then you don't need to be there." [...]

Pink Saturday is the Castro street party that happens on the night before the main Pride festival and is organized by the Sisters of Perpetual Indulgene [...] Broberg also said Monday he was "very disappointed" in the lack of response from Pride CEO Earl Plante and board President Lisa Williams to the men being shot [...] Plante had not visited [the injured men at] the hospital Sunday, Broberg said.

What exactly did he want Plante and Williams to do that the trained medical staff at SF General Hospital emergency room couldn't provide? A visit from the Pride officials would have done nothing to solve the crimes nor assist the shooting victims' medical conditions.

Comments left at the BAR's story were critical of Broberg and questioned his motive in calling for more cop-control of SF Pride and Pink Saturday and his various complaints. Not impressed with Broberg was Heinz Voss:

I volunteered my time for the Sisters of Perpetual Indulgence (the security management company for the Pink Saturday Event). My job this year: To prep the event visitors for their encounter with security, of which one person in uniform was checking for any metal objects brought to the event, and another person in uniform used their eyes and tactile senses to go through every bag (big or small), to avoid a repeat of history.

The Sisters didn't spare ANY expenses to keep the Pink Saturday revelers safe, and look======>success! [...]

Mr. Officer, if you could provide the details of which Pink Saturday Gate you observed "them" from walking right in (be as specific as possible), then the Sisters will be able to identify the paid security personnel, ask a few questions, and ensure continued safety for the revelers of Pink Saturday. Otherwise: What are you talking about?

And Sean Buckley weighs in with these spot-on observations:

Cops are always trying to control everything. Everybody should pay to enter the LGBT Pride Festivities, the cop says. I am glad that he is a cop and not in charge of our Pride day. Estimates of 1.2 million people. I think it went off well for that number of people and we do not need to overreact to one or two inevitable incidents. Cops can be control queens.

Buckley speaks a lot of truth in that last sentence.

We all have concerns about security during Pride season at all events, and no one wants harm to come to anyone. Broberg is entitled to speak his mind as a community member, and I hope he will start attending SF Pride's meetings that open to all, and that he also pushes Supervisor David Campos to hold a City Hall hearing about safety issues during Pride season.

There needs to be much public discussion about these issues, especially at City Hall and broadcast on SF Gov TV.
Posted by Unknown at 11:45 AM
Email ThisBlogThis!Share to TwitterShare to FacebookShare to Pinterest