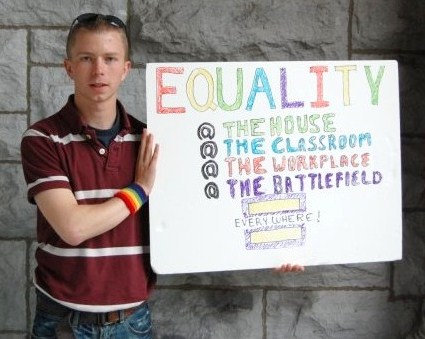 The don't ask, don't tell policy pertaining to WikiLeaks hero Bradley Manning and that he's a gay man and soldier is alive and well, at of all places the Bradley Manning Support Network.

Two San Francisco queer progressives are upset an upcoming ad omits Manning homosexuality and calling on the network to revise their wording. I hope the network, which includes LGBT people, mentions that Manning is gay. From Joey Cain:

Below is the text of the ad that is to appear in the New York Times in support of Bradley Manning. Lori Nairne has brought it to my attention that no where in the text does it mention Bradley is Gay. Hundreds, no thousands of us have worked to educate our LGBTQ communities about Bradley's case and press the idea that he is a Gay Hero who should be honored as such and supported. Apparently, we now need to do some educating of our straight allies.

[The Bradley Manning Support Network needs] to recognize and honor him as the openly Queer person he is. It means a lot to us as LGBTQ people that Bradley did what he did in a great part because of what he experienced as a Queer person. It is also the truth. What lies at the core of every LGBTQ person's being is the act of telling the truth about who we are. We call it coming out and it is the basis of our whole freedom movement.

To not acknowledge the truth of Bradley's Queerness is to put him back into the closet that he so heroically freed himself from.

These concerns of my activist colleagues over this matter sum up where I stand. The support networks needs to hear this from queers. We, the gays, are Bradley Manning.

Read these excerpts then look over the entire pending ad, and details about when it will run in the NY Times:

WE ARE BRADLEY MANNING

We stand with WikiLeaks whistle-blower US Army PFC Bradley Manning

We are American military veterans, artists, journalists, educators, homemakers, lawyers, and citizens. We live in red states and in blue states, in communities urban and rural.

We ask you to consider the facts, and join us in declaring: Enough is enough. Free Bradley Manning now. In a time of endless war and economic distress, a cloud of government secrecy has eclipsed our republic. [...]

Bradley Manning acted on his conscience, with selfless courage and conviction, and gave these secrets to us, the American public. “I believed that if the general public… had access to the information contained within the [Iraq and Afghan War Logs] this could spark a domestic debate on the role of the military and our foreign policy in general as well as it related to Iraq and Afghanistan,” explained PFC Bradley Manning prior to his May 2010 arrest in Iraq. [...]

Journalists used these documents to uncover many startling truths. [...]
Posted by Unknown at 10:48 PM
Email ThisBlogThis!Share to TwitterShare to FacebookShare to Pinterest

Michael, there may be time to change this. I gave $100 wo reading ad, don't reaaly care about how Bradley defines himself, but some do. You should contact Emma or Michael at Courage to Resist. Am organizing a small vigil in Duluth MN for the 27th.