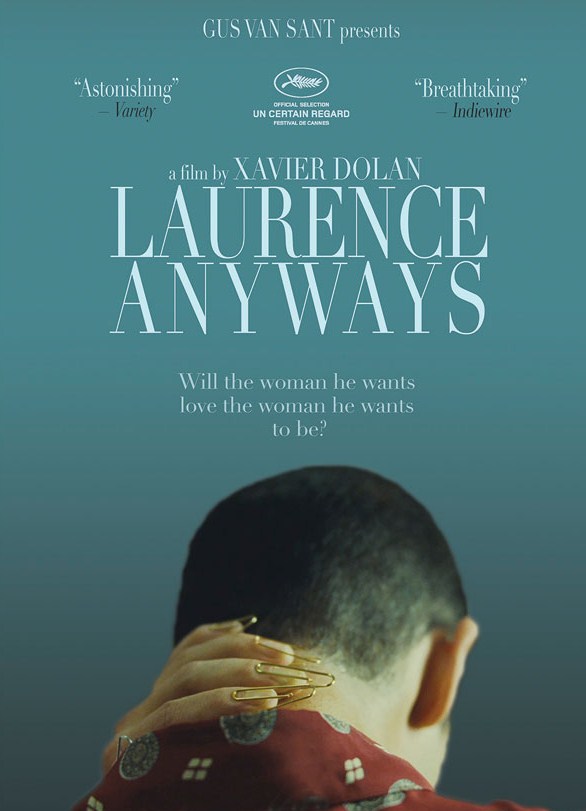 The impossibly talented and still under twenty-five openly gay filmmaker from Canada, Xavier Dolan, has a new film out and you should put it on your must-see list and if possible catch in a theater.

"Laurence Anyways" is about a decade in the intense romance, friendship and sometimes wildly comical relationship between a transwoman and her female companion, that started before Laurence transitioned from male-to-female and eventually his longtime straight girlfriend, Frederique, becomes the more intriguing and complicated character.

There's little anguish on Laurence's part as she evolves into her true self-hood and gender, and without rancor demands the world adjust to her and not the other way around. She occasionally dons female clothes and make-up, but no wig, or male drag with a dash of feminine styling. A happy and successful transwoman - imagine that. When was the last time you saw gender bending exuberantly celebrated in an epic movie that is genre-blending?

Fred accuses her friend of lying about being gay and is advised by her family to end her entanglements with Laurence, which she refuses to do and eventually marries a straight man and has a son.

The film's wild camerawork and fantastic sets and costumes dazzle the eyes, especially during the musical interludes, and all the daring and over-the-top cinematic flourishes add up to one terrific story and fabulously epic film.

A Canadian production in French, "Laurence Anyways" received the Queer Palm at the 2012 Cannes film festival and I can now say I see why it was a well-deserved honor.

Director Gus Van Sant is among its American presenters and the distributor is Breaking Glass Pictures. More details on "Laurence Anyways" and where it is playing are here.

This is one of the musical interludes that pop up at just the right moments.


Here we see Fred, played bySuzanne Clement who won the Best Actress honor at Cannes, stand up for Laurence, the handsome Melvil Poupaud, in a crowded restaurant after rude comments are directed at her loved one.

See "Laurence Anyways" and tell your friends about it because it's one of this year's best films.
Posted by Unknown at 11:06 PM
Email ThisBlogThis!Share to TwitterShare to FacebookShare to Pinterest

LOVED LOVED LOVED this movie. I used to watch the trailer mesmerized by the story and the music.

Glad to know that, Roy. Spread the word about the movie and let's get more folks to see it.