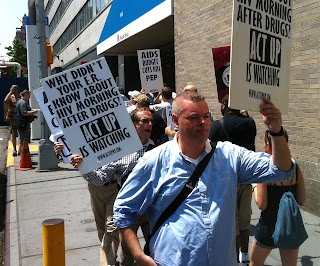 Last week, I blogged about an upcoming demonstration organized by the AIDS Coalition to Unleash Power back East and am pleased to report the action was a success on many levels, including generating productive media attention. An estimated thirty-five activists turned out for the picket, reminding the New York City that AIDS is not over and there is still a need for an un-bought and un-bossed ACT UP.

Members of ACT UP protested outside of Mt. Sinai Medical Center after a gay man who had recently had unsafe sex visited the emergency department there and had difficulty getting a regimen of anti-HIV drugs that can prevent infection with the virus.

“These people are not given care,” said Jim Eigo, a member the AIDS activist group, during the July 17 protest at the Upper East Side hospital. “It’s such a wasted opportunity.” [...]

ACT UP has compiled a log of six examples, ranging from 2009 to the July 5 incident at Mt. Sinai, in which people were either denied PEP or encountered obstacles to getting PEP at six New York City hospitals. Four of the six occurred in late 2012 or 2013. [...]

When Gay City News contacted the city’s 311 system in April, that system had no information about PEP. On July 17, an operator advised that a caller should visit a healthcare provider or emergency room “immediately” to get PEP, though the emergency system does not list the emergency departments or clinics that are funded by the city or state to deliver PEP.


Louis Flores of Queers Against Christine Quinn made this excellent to-the-point video. Check out the Mt Sinai dyke security guard harassing the activists as officers of the NYPD stand by and stay silent.

Kudos to the activists for organizing the demonstration, getting Mt Sinai's administrators to pay attention to demands of changes through education, generating gay and mainstream media stories and for ACTing UP.
Posted by Unknown at 10:14 PM
Email ThisBlogThis!Share to TwitterShare to FacebookShare to Pinterest