Today's paper edition of the New York Times reported on the mishaps of the Bay Area's KTVU and the National Transportation Safety Board regarding the alleged names of the pilots on the Asiana Airlines plane crash a week ago. 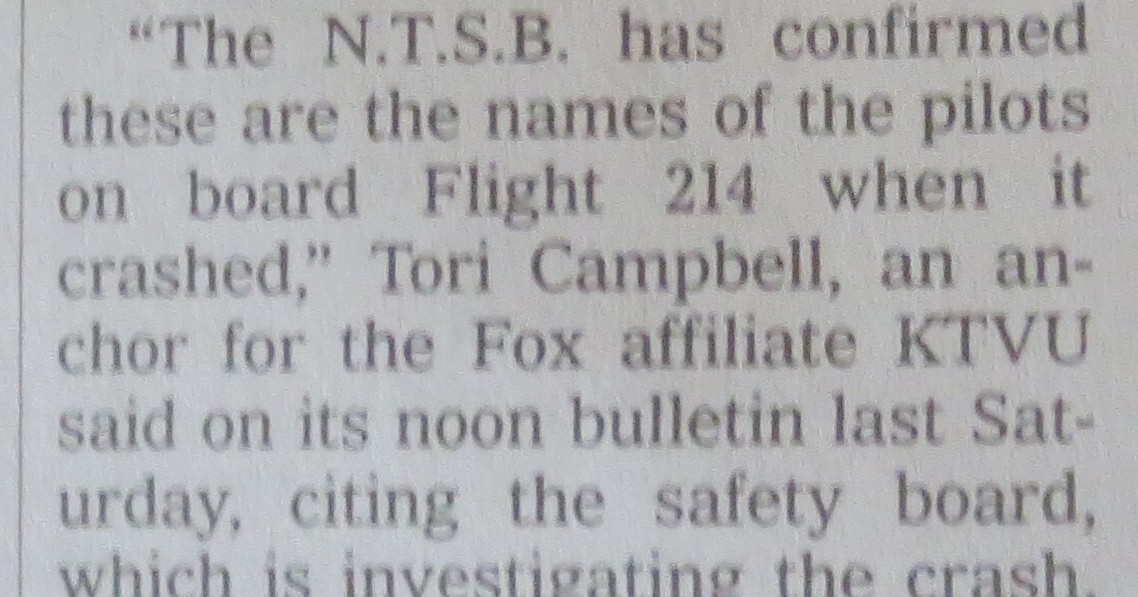 Reporter Ravi Somaiya in the second paragraph wrote that KTVU aired the mistake last Saturday. Not true. The station got it wrong and made its correction, explanation and apology yesterday.

Here's the online version sans the error of the national print edition and no mention or correction of the error:

“The N.T.S.B. has confirmed these are the names of the pilots on board Flight 214 when it crashed,” Tori Campbell, an anchor for the Fox affiliate KTVU said on its noon bulletin on Friday, citing the safety board, which is investigating the crash. She gave the names as Sum Ting Wong and Wi Tu Lo, among others which sounded suspiciously like broad Korean language stereotypes [...]

A version of this article appeared in print on July 13, 2013, on page A10 of the New York edition with the headline: After Erring on Pilots’ Names Amid Crash, Two Apologies.

Yeah, a version that had an error which is not mentioned by the Times. Why hide the minor error of the print edition? Fact-checking needs improving at KTVU, the NTSB and the New York Times.
Posted by Unknown at 1:56 PM
Email ThisBlogThis!Share to TwitterShare to FacebookShare to Pinterest