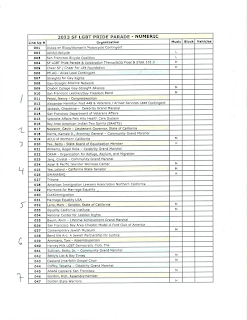 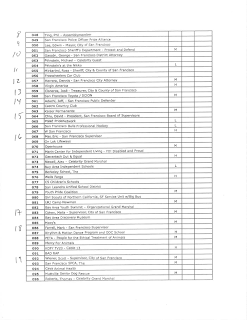 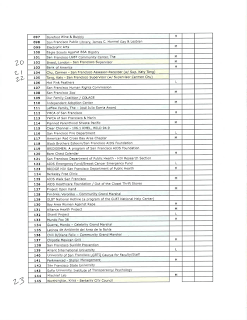 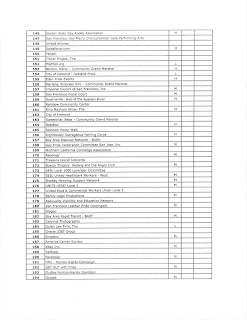 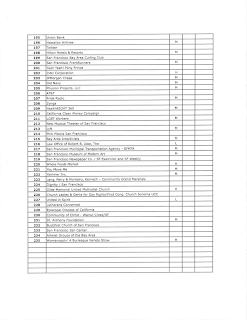 Let's have a look at the five page paper version of the numeric lineup, pictured, from SF Pride for the parade lineup last month. The organization does not yet post the lineup on their site, but at Tuesday's membership meeting where my motion to have the info their site was passed, I was given the paper version.

When I saw Rep. Nancy Pelosi riding in a convertible up Market Street with gay millionaire Jim Hormel at her side on June 30, it was the first time I could recall her in-person participation. She usually just issues a letter marking Pride and skips all the hoopla.

Since the lineup was not online, I didn't know what number her contingent was and the paper version states she was assigned to be contingent eleven. Prime time for the crowds along Market Street, the live television broadcast and reruns, and she received much attention from local TV news stations and old media outlets.

Turns out there were a total of twenty-three elected officials in the parade and they all had contingent placement numbers under 150, out of a total 235 contingents. Why are there so many of them and all get prime time, early slots in the lineup?

Just one question I want addressed as the post-Pride discussion begins. I intend to push for contingent groupings by theme for 2014, such a politicians, AIDS service groups, gay marriage organizations, etc, and to for just one year put the politicians at the very end.

We need to question why elected officials receive the numbers they do for lineup, as we debate every aspect of what goes in producing the Pride parade. Given the large turnout at Tuesday's membership meeting, and many new faces and all the community voices raised with lots of concerns, we can count on a lively debate.
Posted by Unknown at 7:14 PM
Email ThisBlogThis!Share to TwitterShare to FacebookShare to Pinterest

We filmed the parade for GAY USA the Movie. So after marching at #23 with ORAM, the LGBT Refugee and Asylum organization, and reached the end, I used my Press pass and VIP badge to head in the opposite direction to the last of the marchers- and sadly those at the end of the parade were marching to about ten percent of an audience to cheer them on, than when I marched at #23. There was hardly anyone there to cheer for those last numbers. I wonder if the politicians would even march if they knew they were at the back. I think there should be a lottery - or pulled out of a hat.

Thanks for the info about what you saw at the end of the parade. Very much like your idea of picking the lineup out of a hat!!

Dwindling spectator crowds at the end of the parade suggest to me that the parade is too long. Aside from the question of improper placement preference being given to pols or others, isn't the real problem that too many corporate contingents now participate? I've not examined the exact numbers, but non-local businesses and corporate employee groups do seem to comprise the bulk of the parade. Offering corporate sponsorship to support the costly event is one thing, but why should the parade be allowed to degenerate into one (ultimately boring) advertisement for all these corporations? If employees of Google, Facebook, Dropbox, Aloha Airlines, Carnival Cruises, et al ad infinitum, want to participate in the parade, perhaps they should join a local community organization, volunteer for a service organization, or otherwise align themselves to some non-profit entity or cause and march with that contingent come parade day. In my humble opinion, the parade is too long -- unmanageably so as experience has shown -- and the only solution is to raise the bar for participation, perhaps disallowing all but the smallest, local, community-specific businesses to march. The big companies could still give their money, have their logos on all the signage, and rent huge booths to sell their lies, but they really have no place in the parade.