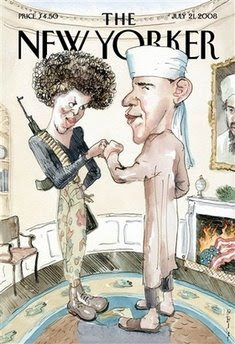 New Yorker Magazine Editors Gave $4,800 to Obama;
Conde Nast Directors Donated to Dubya, Giuliani
There's a loud roaring debate rumbling through the political and media worlds today, all thanks to a viciously offensive and satirical New Yorker magazine cover this week, showing Barack and Michelle Obama in Osama bin-Laden and Angela Davis drag, fist-bumping in the Oval Office, as Old Glory burns in the fireplace.

Controversy aside, I wanted to know who, not if, at the New Yorker had donated to Obama and how much they contributed, and searching the FEC archive I found that editors gave a collective total of $4,800 to his campaign effort.

The largest donation, $2,300, came in February from Francois Mouly, the art director for the magazine. She decides what goes on the cover. Writer and editor Roger Angell gave $500 to Obama, also during the primary race; while staff writer Joshua Hersh and theater critic John Lahr each $1,000 to him in 2007.

Small potatoes really, but Obama's campaign might consider returning those donations, if only to send one more note of unhappiness to the magazine and the illustration gracing its cover today.

I also searched FEC records for donations from several top officers at Conde Nast, the corporate media giant that owns the New Yorker, and found some interesting nuggets of news.

Isn't it great that we live in a country that allows for annoying political cartooning, and where media-owner moguls and journalists at leading political publications can freely write checks to presidential candidates, and no blood is shed from either the drawings? America, you're beautiful.

And now, I've got to run out and buy a copy of the latest New Yorker and read the damn thing.
Posted by Unknown at 9:59 AM
Email ThisBlogThis!Share to TwitterShare to FacebookShare to Pinterest