Over at the page for the Bay Area Reporter's story about a recent meeting convened to weigh options for reclaiming Harvey Milk Plaza, from the hostile homeless folks who frequently sleep out and hangout there, a number of comments have been left from gay men who luckily have never been hassled or assaulted in that public space.

Let's go over some of the one-sided comments

From Andy Blue: I have never once in 15 years felt the least bit threatened, intimidated, endangered, or even bothered by anyone hanging out there. Not once.

Jim Youll says: I have never been threatened, intimidated, or even slightly concerned walking through there. And I'm short, lightweight, and not particularly threatening to anyone. I feel less safe walking through the plaza when it's empty of people... much less safe.

Good for them in that they've not been hassled, but they would be wise to acknowledge others have not been so lucky. For my partner Mike and I, we have been intimidated and Mike was assaulted in the plaza in the daytime. In early June, we were on way to the Castro Theatre to catch the Sunday matinee showing of the restored print of Jean Renoir's classic anti-war film "Grand Illusion".

We came down from the Collingwood side of the plaza holding hands, and as we approached the first purple bench on the left just passed the base of the rainbow flag, the four guys on the bench strung out on either drink or downs called us "faggots". On the right sprawled out on the sidewalk against the railing was an equally high woman, and she forcefully assaulted Mike's feet and calves with her hands and feet.

We told them to stop what the eff they were doing and these homeless folks, all about age thirty with signs asking for spare change and backpacks, just laughed and called us "faggots" again as we headed toward Market Street. I'm mentioning this episode to remind the defenders of the homeless who are hostile and do intimidate other people that Mike and I want to stroll through Harvey Milk Plaza, and not be called faggots or assaulted.

There is a lot of destructive behavior from some of the homeless people hanging out in or passing through HMP and the general vicinity, behavior directed at other people or at public property such as the kiosk toilet last week. As any reader of this blog knows, I also believe there is much outrageous abuse of public space in the form of who controls the public rainbow flag, and the behavior of the hostile homeless and the Merchants of Upper Castro Market must be on the agenda about how to improve this plaza.

My successful small campaign to rid this public space of the health hazard of the disease-riddled pigeon poop, and prevent birds from leaving their excrement, continues with my latest complaint filed last week with the Department of Public Health.

I believe the condo owners at 2425 Market Street, whose entrance is smack dab in the middle of plaza, have for years been in violation of public health law in that they have allowed pigeons to roost on their cement facade that abuts the back of the Diesel store, and the droppings landing on the public sidewalk. That the nub of my DPH complaint.

A DPH employee informed me last week that they have inspected the location and notices for correction have gone out to the condo owners and the management at Diesel, and that correction in DPH-speak mean clean up the encrusted pigeon poop within the next two weeks. 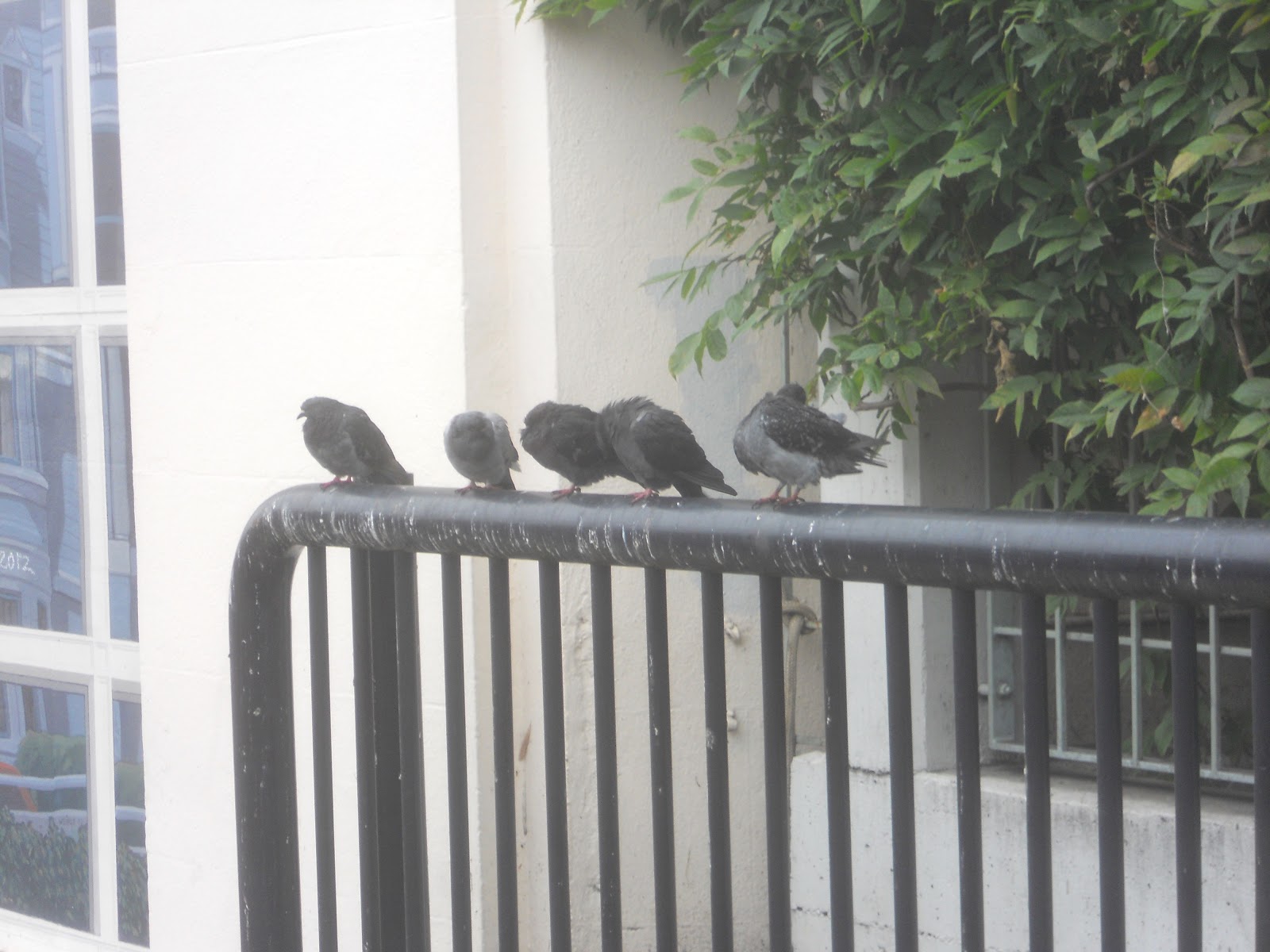 (Pigeons creating a health menace on the hand railing of HMP. Five feet above the railing is the cement facade of the condos, where more birds roost and poop.)

It amazes me we have all permitted the intolerable health risks of having so much damn bird feces, full of potential harm to people with AIDS, befouling the plaza's public spaces, the news rack tops, the highly visible rainbow banner on a utility pole, the railing near where the condo complex meets the Diesel shop and the complex's facade.

And with two complaints, simple steps to reclaim Harvey Milk Plaza back from the birds and their stinky, disgusting poop have been taken by city agencies and Castro Inc to make the plaza more hospitable for more people.

To make this historic public space as fabulous and as welcoming as it needs to be for a diverse number of populations, we must tell destructive homeless folks to stop trashing toilets and assaults when they occur, place the rainbow flag under the control of genuine community-and-city based group of stakeholders and ensure Tippi Hedren can visit Harvey Milk Plaza and not get shat upon.
Posted by Unknown at 7:55 PM
Email ThisBlogThis!Share to TwitterShare to FacebookShare to Pinterest