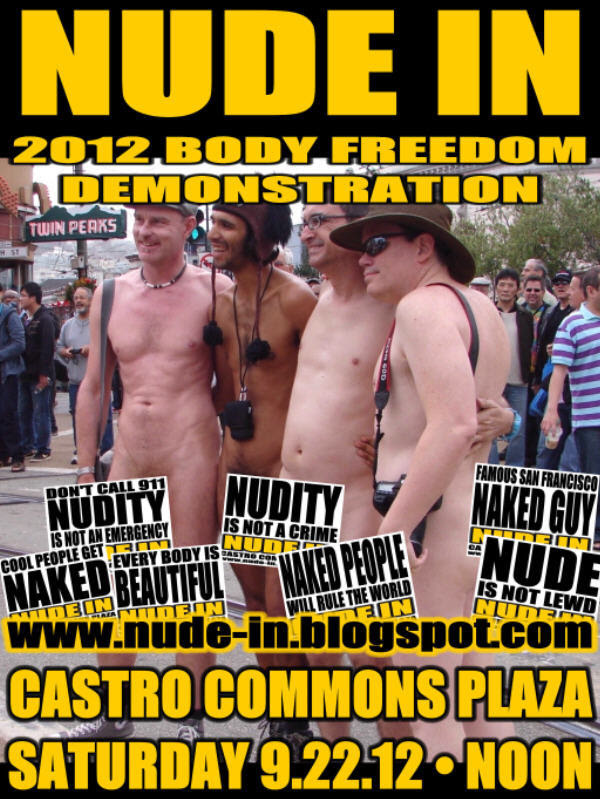 The human body is one magnificent and beautiful creation, and I am a proud supporter of the nudists who hang out in and parade around the Castro District. Even before Mike and I were redistricted into District 8, we appreciated the promotion of nudity in the streets and now that we're D8 voters we urge Supervisor Scott Wiener to instruct the San Francisco Police Department to leave the naked guys alone.

Today, my friend and longtime nudist Mitch Hightower sent out this alert about the latest crackdown on bare butt boys. Hightower also informs us that there will be a Nude-In on Saturday, September 22, the day before the enormous Folsom Street Fair where there will be thousands of nudists and kinksters of all sexual orientations.

Here's the release from Hightower:

The San Francisco Police Department has begun regularly dispatching groups of uniformed officers from the Mission Station to the Castro Commons Plaza, (aka Jane Warner Plaza), on Cock Ring Patrol.

Those frequenting the area report that either a duo or trio of cops approach selected male nudists and inform them that wearing cock rings draws undue attention to the genitals, and is therefore, under the law, considered to be lewd conduct.  Nudists, even those not wearing a cock ring at the time, are also informed that they will face arrest if caught wearing a cock ring and will subsequently be required to register as a sex offender.

Inquiries for comment from the Mission Station about the SFPD Cock Ring Patrol remain unanswered.  One male nudist reported that over the Labor Day Weekend he was approached by police and told that his hat was drawing undue attention and therefore his public nudity was lewd.

The third annual NUDE IN Body Freedom Demonstration was already scheduled for Saturday, September 22 at Noon, (the day before the Folsom Street Fair), before these developments and NUDE IN organizers are encouraging supporters and attendees to wear hats and cock rings to challenge the lewd conduct assertions.

Posted by Unknown at 10:24 AM
Email ThisBlogThis!Share to TwitterShare to FacebookShare to Pinterest