Can San Francisco
Be the First City to End HIV? 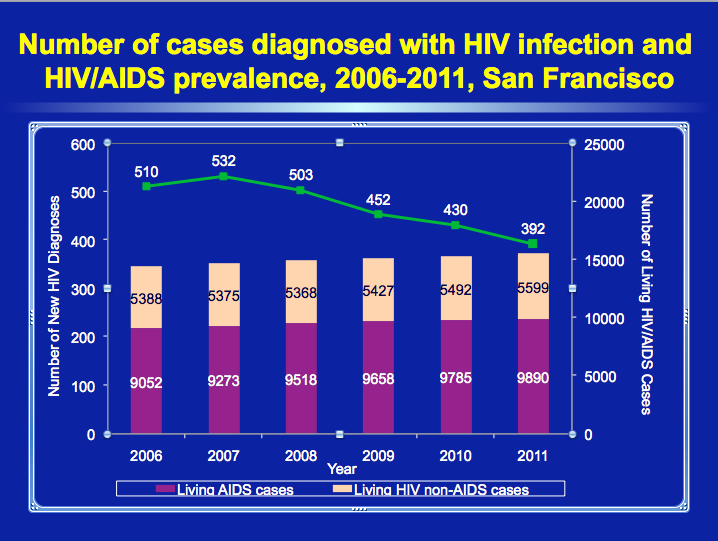 (Most recent HIV statistics from the SF DPH.)

My latest column for Edge on the Net has been published and I'm cross-posting here, to call attention to the views of local folks regarding the article's provocative question:

When the San Francisco AIDS Foundation’s executive director Neil Giuliano spoke the following words over the summer shortly after attending the International AIDS Conference, he raised the hopes of many in the local LGBT and HIV communities.

"I really think that [San Francisco] could be the first city in the U.S. to end the spread of new HIV infections," Giuliano said, in an article by Edge National News Editor Winnie McCroy after he made an appearance at New York City’s LGBT Community Center.

Long viewed and widely respected by domestic and international health experts as America’s AIDS Model City because of cutting-edge care of people living with HIV and innovative prevention programs, San Francisco could be one city likely to end HIV transmissions.

Recent statistics illustrate the effectiveness of the programs and individuals making responsible sexual choices in driving down the numbers.

The Department of Public Health in August released data for 2011 and approximately 400 new infections were diagnosed, compared with just over 500 in 2006. New infections have been steadily declining as far back as 2004, according to DPH researchers.

Key leaders here were asked to weigh in on Giuliano’s assertion, and there were a range of opinions expressed starting with basic agreement from Dana Van Gorder, who leads the treatment advocacy group Project Inform.

"I believe that we now have the tools needed to make new infections in San Francisco extremely rare, certainly to stop growth of the epidemic, and promotion of PrEP with guys who are bottoming without condoms is critical," said Van Gorder in a recent email. "I think additions to the arsenal of prevention options, particularly microbicides and a vaccine, could end new transmissions."

Community leader and long-term AIDS survivor Gary Virginia feels that a public media campaign directed toward HIV-positive people to offer emotional support would be helpful on many fronts.

"Many poz men are battling pill fatigue combined with sustained loss of friends and an unnatural sense of living in limbo," said Virginia. "Years ago the ’Be here for the cure’ campaign offered hope during a very scary time of limited treatment regimens. Negative guys should be reminded HIV is no walk in the park, and survivors need to know they are not forgotten. There’s light at the end of this dark tunnel."


Some Doubt Whether An ’End’ to HIV is Possible

One voice offering a countervailing opinion is writer and veteran gay men’s health advocate Michael Scarce, who believes this city is not capable of halting HIV infections for a variety of complex reasons.

"First and foremost, this is not a walled city, neither within nor outside its imagined boundaries. San Francisco does, however, have a long history of failed attempts to socially quarantine disease both indirectly and institutionally [such as closing the bathhouses]. Even if HIV is bio-medically stopped, the stigma, disparity and divisive inequity that drives it will continue," he said.

Scarce, who’s played a crucial in organizing gay health summits, has long advocated a more comprehensive approach to gay wellness that looks beyond HIV as the defining health matter for the community, an approach that demands attention.

"Ironically, in Gay Mecca there is no San Francisco Department of Gay Men’s Health or even a city-wide task force coordinating efforts around our health issues," said Scarce. "As the non HIV-related health needs of gay men remain increasingly unaddressed, either HIV will not ’stop’, or it will be replaced by a constellation of equally devastating health problems."

Among those unmet health needs are developing and maintaining good mental health, dealing with anti-gay stigma, combating drug abuse, especially meth addiction, curbing alcohol and tobacco intake and social isolation, while also contending with ordinary daily pressure from employment and paying the rent, or finding and keeping a well-paying job and a decent place to live.

"San Francisco is in a very good position to significantly lower new HIV infections due to the strong community-science partnership, the world class research, and the support of our leadership," said Garcia through a spokesperson.

The partnership Garcia speaks of took decades of controversial public discussions and individual conversations, hit-or-miss prevention messages, a deep understanding of why gay men make the sexual and health choices they do, and it’s led us to the current downward trend of HIV transmissions.

San Francisco may not become the first city to end HIV, but whichever city achieves that goal it will be because of the ideas developed or perfected here and everyone will applaud the achievement.
Posted by Unknown at 12:41 PM
Email ThisBlogThis!Share to TwitterShare to FacebookShare to Pinterest