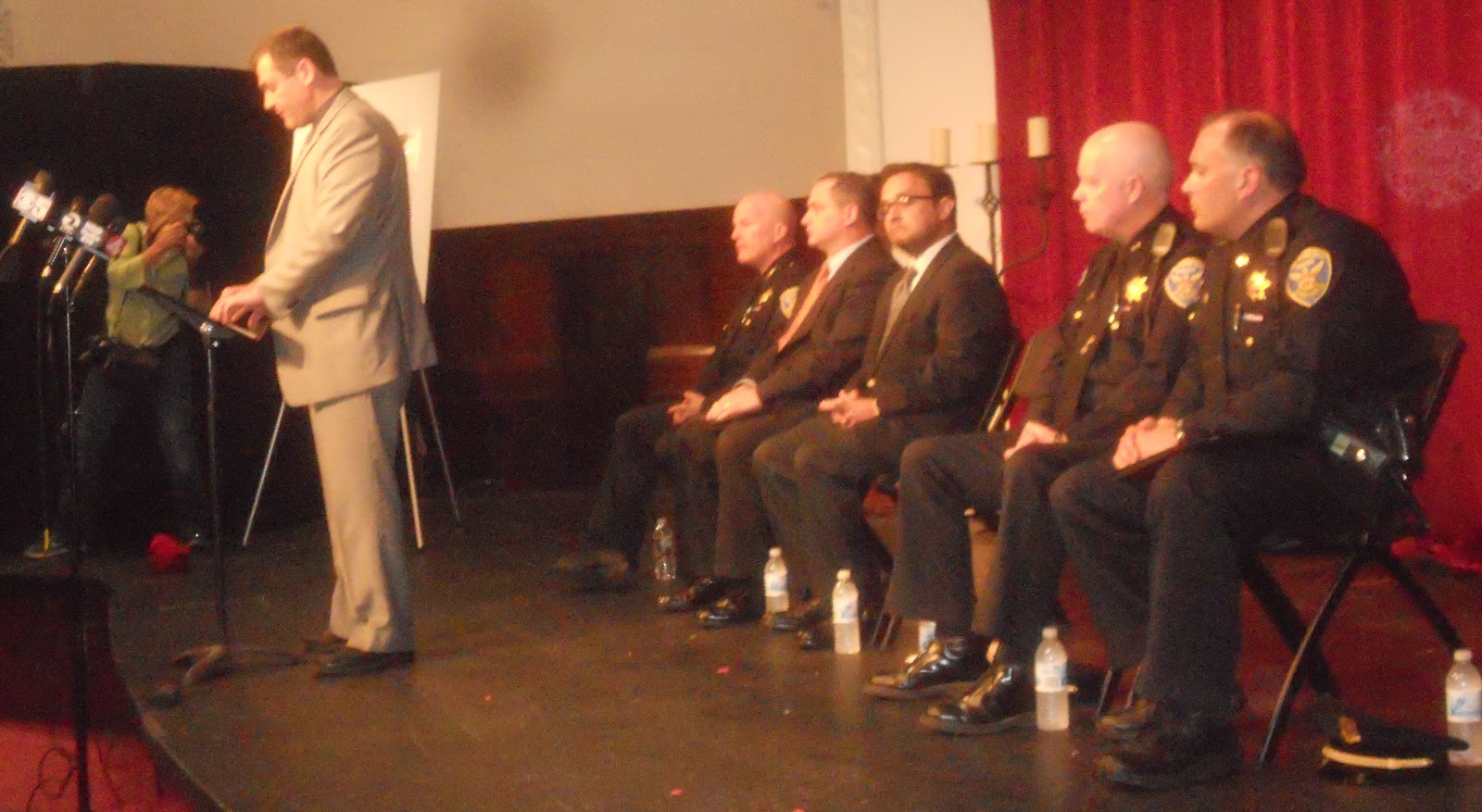 This morning, thanks to a Bay City News story carried at the SF Appeal, I learned that a community forum was happening a few blocks from our apartment:

San Francisco police will hold a town hall meeting on Monday to discuss concerns about a recent officer-involved shooting that has sparked demonstrations for the past two nights in the Mission District . . .

The shooting that inspired these protests was reported at 8:06 p.m. Thursday on the 200 block of 14th Street, police Sgt. Michael Andraychak said. Two plainclothes officers from the department's Gang Task Force were working along with two probation officers in separate vehicles in the area when they saw two people they thought they recognized as gang members . . . While running, the suspect pulled a gun, later determined to be a TEC-9 pistol, and the officer ordered him to drop the weapon, Andraychak said. Instead, the suspect turned toward the officer and began to raise the pistol. The officer feared for his life and shot at the suspect, Andraychak said . . . The town hall meeting is scheduled for 11:30 a.m. Monday at Cornerstone Church at 2459 17th St., police said today.

The 40-minute press conference was not a genuine town hall meeting by any stretch of the definition, and that 11:30 a.m. start time was just perfect to take advantage of noon TV broadcasts.

For the first fifteen minutes, Chief Greg Suhr spoke from a raised staged in the church's sanctuary, where an enlarged poster of the suspect and his weaponry were on display. Behind Surh sat other police brass, Supervisor David Campos and Police Commission president Thomas Mazzucco, and some of them made remarks.

When Suhr asked for questions, I started off asking if this was a true community meeting because it didn't feel like one to me. There were dozens of uniformed and plainclothes officers lining the walls, pictured, along with members of the district attorney's staff, many probably getting paid while attending the presser. Also well represented were local TV stations, mainstream print outlets and local news bloggers.

I said that there had not been enough promotion of the meeting/presser and that 11:30 a.m. was not an ideal time for a community forum. It's additionally intimidating, in my view, that there were so many cops present. The church location, not even half a block from the Mission police station, was very convenient for the officers to make an appearance.

Many of the other speakers offered praise for the cops and strongly denounced the parole violators carrying guns, while calling for arrests demonstrators who defaced the police station, local small businesses and bank branches. I estimate 20-25 local residents were at the presser, but where was more of the Mission community this morning?

As if to illustrate how this was not a town hall set up and ready to have a give a take between cops and the community, there was no designated spot for speakers to stand and offer public comment. A member of the audience would stand up from their seat to speak, begin talking and camera crews as photographers jostled for position near the speakers.

At about 12:10 p.m. the presser ended, and I left the church thinking the police had done a wonderful job of staging a morning event to make themselves look good, and to be able to claim they held a supposed community forum. 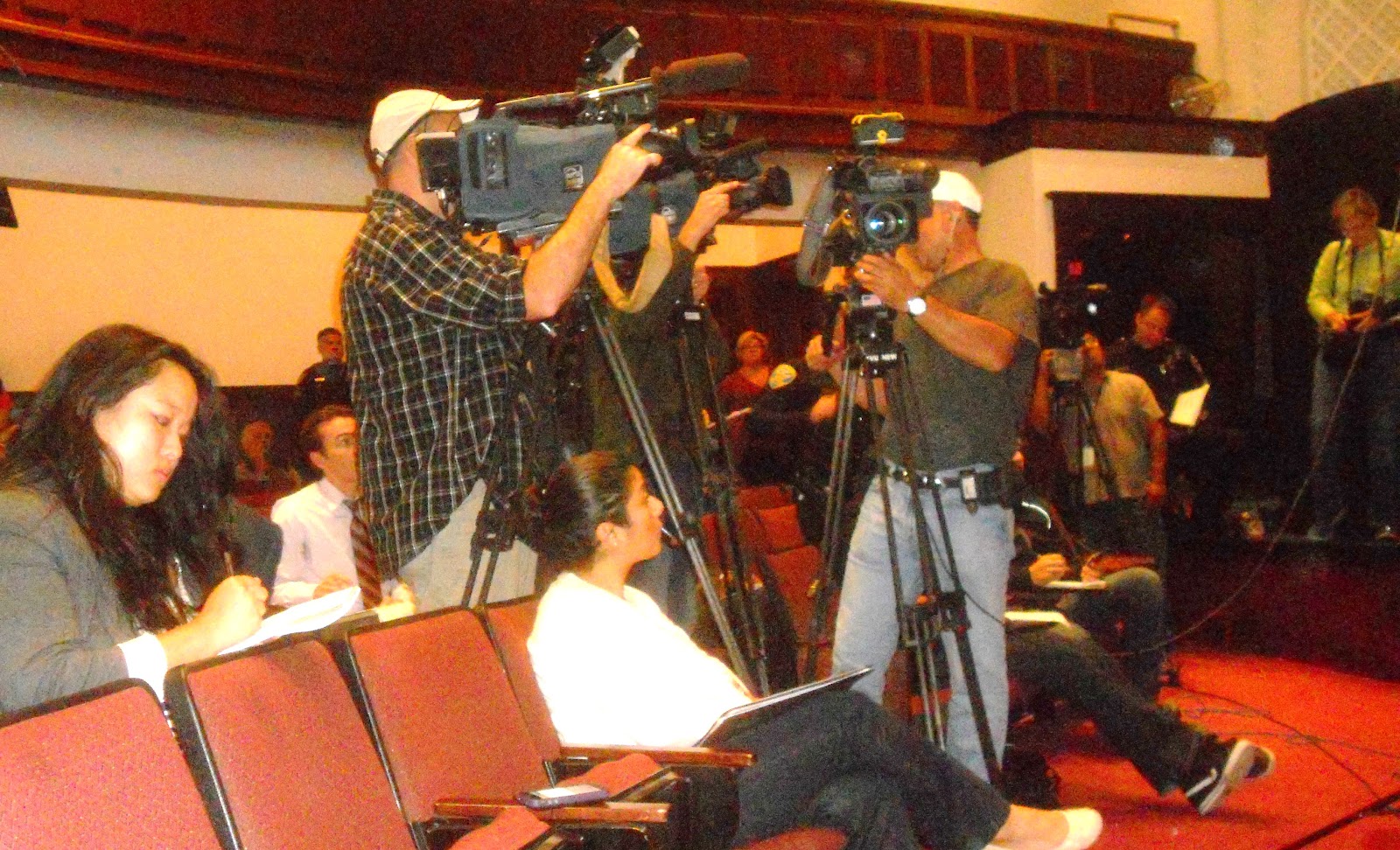 Some advice for Suhr and his department. Schedule a town hall in the early evening so more neighbors, business owners and community leaders can attend.

Consider holding the meeting at City Hall so it can be broadcast on SFGov TV. Structure the meeting so the police make remarks, followed by community leaders given an equal amount of time, clearly designated a spot with a microphone for speakers to offer public comment, and have an independent facilitator run the meeting. Also ask the camera crews to not position themselves in from the speakers on the stage, blocking the view of folks in the audience.

It's also time to ask Supervisors Campos and Scott Wiener, who jointly represent the Mission, to hold their own town halls about the violence and related issues. I can't recall the last time Campos or Wiener held an open forum, can you?

True community engagement from the SF police force was not on display this morning, and that is detrimental to all of us.
Posted by Unknown at 1:17 PM
Email ThisBlogThis!Share to TwitterShare to FacebookShare to Pinterest