Bravo to Tommi Avicolli Mecca for his role in arranging a meeting between Scott Wiener and four nudist leaders at City Hall. Nudist organizer Mitch Hightower shared details of what happened, along with a photo of the guys in clothes!

The social and political vibrancy of the Castro neighborhood could use a huge injection of open forums with all of our queer electeds and appointees from Wiener to Leno to Ammiano to Campos to Dufty. One element we need much more of is public communication at town halls. We need Queer Question time with our electeds, if we're ever going to get a handle on the myriad controversies vexing all of us.

Here's the report from Mitch: 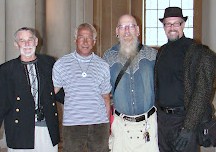 (Nudist activists, from left, George Davis, Rusty Mills, Woody Miller and Mitch Hightower pose at the top of the grand staircase in the rotunda. Dressed for a meeting at City Hall earlier this week.)

You may not recognize this group of men with their clothes on, as they are best known for being naked around Fog City.

On Tuesday, September 25, the aforementioned activists met with San Francisco Supervisor Scott Wiener at his office in City Hall. The meeting was set-up to discuss increasing complaints about the nudists at Jane Warner Plaza in the Castro neighborhood.

The supervisor indicated he believes the nudists have “taken over” the plaza and are preventing the rest of the community from using or having access to this public space. The supervisor also reported that the majority of complaints he has received are from affluent gay men who reside in the area.

The group of activists made a presentation including a Change.org petition and offered some solutions to ease tensions. Ideas included raising funds for plaza improvements. The supervisor indicated the problem had already progressed past the tipping point and no goodwill gestures can turn around the negative public sentiment now.

While the meeting was cordial and very respectful on all sides, there was no definitive outcome. The nudists agreed to continue to develop ideas and alternatives to ease tension in the neighborhood, and the supervisor indicated he would continue to communicate with the group.
Posted by Unknown at 4:08 PM
Email ThisBlogThis!Share to TwitterShare to FacebookShare to Pinterest

It's interesting that he wants it to be taken over by one other group, textiles. Cooperation should be considered for the use of the plaza by all members of the public.