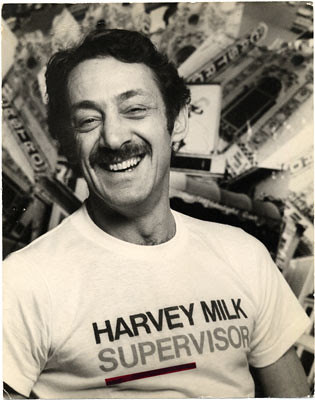 (No question: This man would honor President Obama's proclamation and 9/11 hero Mark Bingham.)

For the third time in as many months the iconic rainbow flag on city property at Harvey Milk Plaza in San Francisco, controlled by the private Merchants of Upper Market Castro, won't be lowered out of respect for a proclamation issued by President Barack Obama. Earlier today, the leader of the free world, released this decree:

Thanks for your email, just received late morning today, the day before the effective date for your Rainbow Flag request. This does not provide sufficient time for MUMC's volunteer Board to consider the request, and so we cannot respond definitively. Please see MUMC's publicly-posted Policy regarding the Rainbow Flag at Harvey Milk Plaza, posted on our website at http://castromerchants.com/castro-merchants-flag-policy. Please especially note portions of that Policy regarding the fundamental principle of the Flag Policy, and timing of requests.

What MUMC doesn't understand is that President Obama is not familiar with their hurdles for lowering the rainbow flag. He's kind of busy with other issues right now. Too bad MUMC does not provide for any flexibility when our president issues such proclamation. In early August, when the president and Mayor Ed Lee requested flags fly at half-staff to honor the shooting victims in the Sikh Temple killings in Wisconsin, Wilson made a request to Bennett for a flag lowering. Bennett's reply:

We're also working on clarifying the City's intent here, and on a mechanical issue with the Flag, for both of which we hope to have answers in the morning.

Um, the mayor's intent was clear: Lower flags on city property. Bennett never stated what her mechanical excuse was. This lame rejection came a few short weeks after the bloody massacre in late July in Colorado, when MUMC again refused to lower the LGBT pride flag.

The disrespecting of the LGBT community and President Obama, for a simple lowering of a rainbow flag, is a blot of shame on MUMC. They have come up with endless ridiculous reasons why they need to control this crucial piece of public property, and how burdensome it is to fly the flag at half-mast.

It would take all of ten-minutes to insert the key into the control box of the flag pole and bring down half-way. Oh, the heavy burden that requires of the stewards of the public flag at Harvey Milk Plaza!

While MUMC again shows irrational resistance to respecting the president, allowing the Castro's LGBT community to symbolically join in solidarity with other American communities tomorrow and lowering flag, they are also dishonoring local 9/11 hero Mark Bingham. He perished in the fields of Pennsylvania eleven years ago, along with thousands of other Americans and folks from foreign lands.

Thanks to Bennett, MUMC, Supervisor Scott Wiener and Mayor Ed Lee, the entire San Francisco LGBT community won't be allowed to use our public rainbow flag for a patriotic and cost-free purpose.
Posted by Unknown at 4:09 PM
Email ThisBlogThis!Share to TwitterShare to FacebookShare to Pinterest