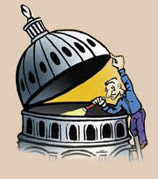 Hope Johnson is a former member of the Sunshine Ordinance Task Force, where she served the city with impartiality and fairness, and she's very active in efforts to restore the SOTF to a functioning body. It's been on hiatus for a number of months because of underhanded manipulations by Supervisor Scott Wiener.

Yesterday, Hope sent out this alert recruiting members of the public to attend one of two important meetings at City Hall. I plan to be in attendance and add my voice to those advocating for an unbiased SOTF whose members have sunshine backgrounds and are committed to the public's needs. Here are the details from Hope:

San Francisco needs enforcement of its open government laws and these Ethics Commission regulations are an extremely important part of effective enforcement. This meeting is an end-run around including the Sunshine Ordinance Task Force in such an important decision. Ethics Commission staff is well aware the Task Force cannot legally meet to discuss the revised regulations.

Please attend the Ethics Commission meeting to speak out against the end-run around the Sunshine Ordinance Task Force and urge the commissioners to postpone the hearing until the Task Force can meet.


Posted by Unknown at 11:56 AM
Email ThisBlogThis!Share to TwitterShare to FacebookShare to Pinterest