Put aside the respective agendas of Evan Wolfson and his gay marriage group Freedom to Marry, and Brian Brown of the oppositional National Organization for Marriage, because I want to focus on the matter of transparency at both groups.

Almost two-years back, I blogged about FTM not having any 990s posted on their site and it was due to the fact that it lacked its own tax exempt status from the IRS, and that the Astrea Foundation was FTM's fiscal sponsor. Wolfson said:


We are on the verge of reconstituting Freedom to Marry as an independent 501c3 and 501c4, pending IRS certification, at which point we will handle our own disclosure . . . But any suggestion that NOM is in the least bit transparent is laughable, given their consistent effort to subvert disclosure laws, their phonying up of their reports, and their massive flood of money from hidden donors. 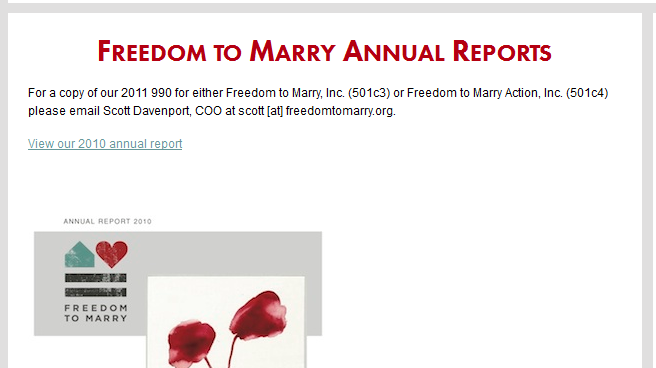 FTM now has 501c3 and 501c4 tax statuses, and each arm of the group now has filed their first and only IRS 990s, however, in a surprising act of opaqueness FTM doesn't post them on-site. At their annual reports page, pictured, FTM states one has to file a written request in order to inspect the 990s. Any suggestion that Wolfson can keep his 990s off-site and still claim transparency is laughable.

I requested and received copies of FTM's 990s and shared them with three veteran gay journalists, asking them to comment on any aspect of the returns.


I do wonder if an organization that relies entirely on large donors and has a single purpose can be sustained, but I am not an expert on such things and it may be that getting all your cash from a small number of people is par for the course for an organization of this size. If you add up the listed individual contributions, you'll see that Freedom to Marry's money came from a few dozen people.

There will be four marriage votes on November 6. Suppose we do badly on that day. What does an organization that is dedicated exclusively to marriage do then? As you know, our record on referenda going back to 1978 is that we have lost more than eight out of 10 and we have lost every marriage vote. If we win half the votes on November 6, that will be impressive. If we do better than that, that will be very impressive.


That all of these 501(c)4 groups are able to hide their donor list is a disgrace across the board left and right. These are the new centers of political spending in America--not corporations under Citizens United. Why would corporations make direct political expenditures when they can anonymously contribute to a 501(c)4--whether it's run by Wolfson or Rove.

One of the things FTM's 990s tell us is that handful of wealthy people want their gay kids to be able to marry and pass their estates on without tax consequences.

We know Paul Singer gives them money. Maybe David Koch does too. They support gay marriage, but these are two of the most destructive people in America today with a main agenda of eliminating taxes and regulations and enslaving the middle class and poor. Their contributions to FTM do not in the least offset all the money that they give to the anti-gay Republicans who are running Congress and the state legislatures.

Do we not have ANY larger vision of social justice in America? [Bolding added, because it was necessary. -MP]


And independent gay and AIDS reporter Bob Roehr gives us his views about all of this:


I'm all for greater transparency and not being able to hide contributions, but that's very much a separate issue; FTM seems to be operating completely within current law and practice and on that count there is nothing for me to get upset about.

On Duncan's point, most of the national gay groups have not developed a broad base of support and rely upon foundation and/or corporate support for a larger portion of their revenue than I would be comfortable with.

Some of the major funders have decided to invest in Evan. Sometimes he goes to them with specific proposal for additional "investment" in a specific state campaign, but most often they are supporting his vision. The people behind it realize it is a long haul. I think Evan would be completely happy to win all of the battles and close the organization, and do something else.


Many thanks to Osborne, Humm and Roehr for sharing their perspectives. Allow me to close by saying not only do I want FTM and NOM posting their IRS 990s on-site, I believe all non-profits should do so if they wish to claim they are genuinely transparent.
Posted by Unknown at 4:12 PM
Email ThisBlogThis!Share to TwitterShare to FacebookShare to Pinterest

I see NOMBLOG has very excitedly picked up on this story. They have, of course, edited it down for their own purposes. But thanks for playing into their hands.

Evan Wolfson should just post his IRS 990s to his site. There's no need to make folks file written requests to read FTM's returns, if FTM wants to maintain they are transparent. The fact remains that NOM shares 4 years of IRS 990s on their site and FTM posts zero.

FTM should post all of its 990s. No question about that and no question that you are right to call them out. But comparing NOM favorably to them was a poor judgment. NOM is ridiculously opaque. NOM routinely requests extensions on its 990 filing so that the data are as stale as possible once released. And it does not post any 990 until after it has been circulated on the internet. It's most recent 990 was kept secret until a reporter at the American Independent requested it and the form thereafter circulated. (I note that the much-hyped, HRC-run NOMExposed project failed to request the 990. Another HRC fail.)

The above commenter is correct. In rightly going after FTM, you wrongly gave NOM credit it doesn't deserve.

The facts about who is posting 990s cannot be ignored, whether you like NOM's agenda or not. NOM shares 4 tax returns on its site and they deserve credit for this act of transparency versus FTM which does not post 990s on-site. Instead of telling me what you think, how about pushing FTM to get transparent?