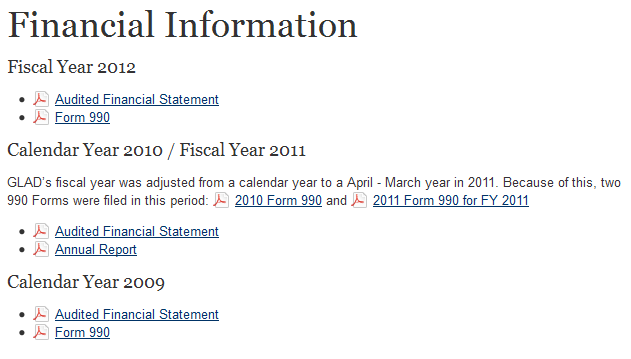 Remember last week I told you Lee Swislow the executive director of Gay & Lesbian Advocates and Defenders, would update her group's About Us page to include IRS 990s? This past week, Sislow kept her promise to expand GLAD' transparency to the community and their tax returns were posted on their site.

I'm so pleased with this development and have to note, and praise Swislow, for sharing four years' worth of 990s. This is significant because it's one more transparent LGBT advocacy organization going beyond sharing a single return or the more common number of three.

As the gay sunshine continues to expand due to my advocacy, smart executive directors embracing or increasing their commitment to fiscal accountability to donors and the LGBT public, the expansion should serve as an nudge to groups that currently do not post any 990s on-site.

Such groups include the AIDS Healthcare Foundation, the Courage Campaign, Freedom to Marry, the Los Angeles Gay and Lesbian Community Center and the National Minority AIDS Council.

I hope the leaders of those groups follow the fabulous example of GLAD regarding transparency and that before we see President Obama elected to a second term in November, we are able to inspect three to five years of IRS 990s on those groups' sites.

Hey Lee Swislow, you're my gay sunshine heroine of the week!
Posted by Unknown at 5:12 PM
Email ThisBlogThis!Share to TwitterShare to FacebookShare to Pinterest