9/11 Picket at Cliff's Variety Over
Castro's Dissing of Obama, Bingham 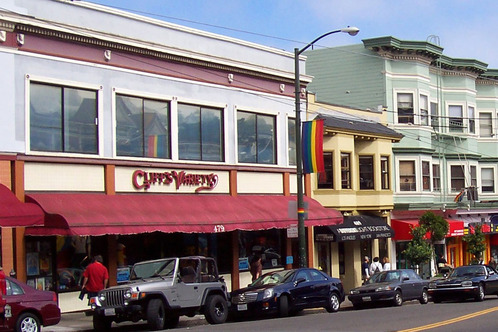 Enough is enough with the unrelenting b.s. and lack of democracy with the Merchants of Upper Market Castro.

Tomorrow, on September 11 from noon till 1 pm, I'll be staging a one-man picket with a bullhorn in front of Cliff's Variety where Terry Bennett, the president of MUMC is general manager. The store is located at 479 Castro Street, pictured.

The latest rejection to lower the flag to honor President Barack Obama's proclamation and 9/11 and Castro gay hero Mark Bingham, is a damn good reason to picket Cliff's Variety. Frankly, I really don't want to be out at Bennett's place of business, but after nearly two-years of MUMC refusing to keep it's promise of holding a public dialogue about sharing responsibility and control of the rainbow flag on public property at Harvey Milk Plaza, it's time for me to send a message this way to MUMC.

MUMC's previous director Steve Adams, vice president of Sterling Bank, offered these lame excuses why the flag couldn't be used by grassroots LGBT community members. He said, without any independent proof, that so many requests came in if he were to honor them all the flag would perpetually be at half-mast.

Look at some examples of inconsistency from MUMC. They claim rare flag lowerings should be only for locals, which is why they wouldn't lower it for Elizabeth Taylor when she died, MUMC did fly the rainbow flag at half-mast when lifelong Washington, DC, resident Frank Kameny died.

MUMC wouldn't raise the New York state flag when gay marriages began in the Empire State last year because the request came from me, they did fly the brown bear pride flag for Bear Weekend this past February.

The group also grants special privileges (forget about "equality" in the Castro) to the kink community every September, when the Leather Flag flies for entire week before the Folsom Street Fair brings thousands of visitors to town. MUMC uses that week-long occasion to attract rainbow dollars.

When Bill Wilson and I worked last October with then-head of the General Services Administration for San Francisco, Amy Adams, the agency that oversees the Department of Public Works which controls the plaza property, to bring key stakeholders to the table to work on a resolution to this flag control problem, Supervisor Scott Wiener killed the process.

Members of MUMC bemoan the hostile homeless folks congregating at Milk Plaza, and they allege a desire to activate the plaza, yet every attempt by activists to do exactly that and use the flag and pole for fabulous actions to attract responsible people to the plaza is rejected. The policy of MUMC is to keep _all_ folks away from _their_ flag and then kvetch the plaza isn't vibrant.

Since MUMC is a private membership organization, the public is prohibited from addressing the group at their meetings. In short, there is no way to directly communicate with MUMC and propose ideas to end this impasse, leading me to take my message to their president's business during the height of the business day.


Posted by Unknown at 5:03 PM
Email ThisBlogThis!Share to TwitterShare to FacebookShare to Pinterest