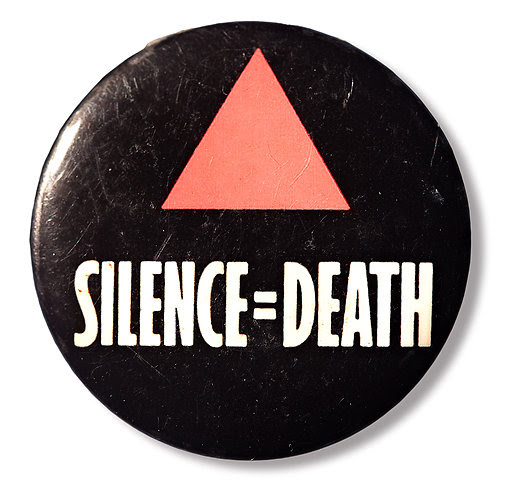 The New York Times yesterday ran a feature titled "A History of New York in 50 Objects" and one items included was an old metallic Silence = Death button from ACT UP. My friend and ACT UP member Bill Dobbs provided the Times with the button, pictured, on which you can see scratches. Here's an excerpt from the Gray Lady's caption:

In 1982, 752 cases of a mysterious and fatal illness that would be called Acquired Immune Deficiency Syndrome were reported in New York City. By 2010, nearly 170,000 cases had been diagnosed. Over 30 years, the illness devastated whole communities even as it served as a focal point for the gay rights movement, especially Act Up, which campaigned vigorously against the government’s slow response to the epidemic . . .

As a co-founder of ACT UP, I must point out that while there were many gays and lesbians in the group and we had a pro-gay agenda, our ranks were filled with lots of straight people infected with HIV or affected by the epidemic. It is not okay to render the heterosexual folks of ACT UP invisible.

I also object to the Times so narrowly defining ACT UP's agenda in the caption. Yes indeed, we were rightfully pissed off at our government's woefully inadequate handling of the medical and political crises. However, we also had to contend with the media, especially the Times due to its far-reaching influence, either ignoring the AIDS epidemic or underplaying the severity of it.

Attention to people with AIDS and the crisis in the Times was so bad, a protest was held at the home of the publisher, which I was at. Excerpts from Doug Ireland's August 8, 1989, Press Clips column in the Village Voice:

This demo was preceded by a Sunday zap in which outlines of dead bodies were stenciled on the streets around Sulzberger's pad, and the neighborhood decorated with stickers emblazoned, "All the News That Kills." By the time ACT UP's troops arrived for Tuesday's picketing, they found the sidewalk in front of chez Sulzberger torn up and barricaded, and a waiting army of police who forced the demonstrators onto a side street . . .

"AIDS Crisis Escalates While N.Y. Times Sleeps" was the headline on the leaflet ACT UP distributed, which asked: "Why, instead of actively investigating the work of federal health organizations, does the Times merely rewrite [their] press releases? ... Such compliance makes the Times a mere public relations agent for an ineffective government.... Why did the Times, in its June 29 editorial (Why Make AIDS Worse Than It Is?) dismiss a new federal study finding a 33% under-reportage of AIDS infections in the US? This callous editorial assured its general readership that AIDS will be over soon, once infected members of undesirable risk groups die off." . . .

During the many terrible years when the paper didn't give a damn about people with HIV/AIDS and those who loved and cared for them, the criticism against the Times was not confined to just the alternative Village Voice. In the 1990 book "AIDS Demo Graphics" by Douglas Crimp and Adam Rolston, these facts were prominently mentioned:

A book will one day be written about the New York Times's continuous failure to report the AIDS crisis accurately -- if at all. It will no doubt begin with the infamous comparison noticed by Larry Kramer:

• During the first 19 months of the AIDS epidemic (by the end of which time there had been 891 reported cases), the Times carried seven articles about it, none of them on the front page.

• During the three months of the Tylenol scare in 1982 (seven cases), the Times carried fifty-four articles about it, four of them on the front page.

While it's certainly good to see the Silence = Death button included on the list of historical New York City objects, let's not quietly accept the New York Times absolving itself of how it was the necessary target of ACT UP's ire.
Posted by Unknown at 11:49 AM
Email ThisBlogThis!Share to TwitterShare to FacebookShare to Pinterest