SF Taxpayers Paid for Shultz's Private Soirees at a Cost of . . .

Thanks to open government laws, I have obtained from Bill Barnes of the SF General Services Administration the payment forms submitted by wealthy socialite Charlotte Shultz on behalf of her San Francisco Host Committee nonprofit.

Despite voters in 1998 approving Prop F which barred the City from spending money on the Protocol Office, which just happens to be headed by Shultz, the City has for many years given that nonprofit at least $250,000 annually and practically all of the funds are spent on activities of the Protocol Office. Where the hell is City Attorney Dennis Herrera and his bloated staffers when we need them to investigate why Shultz appears to be violating municipal law? 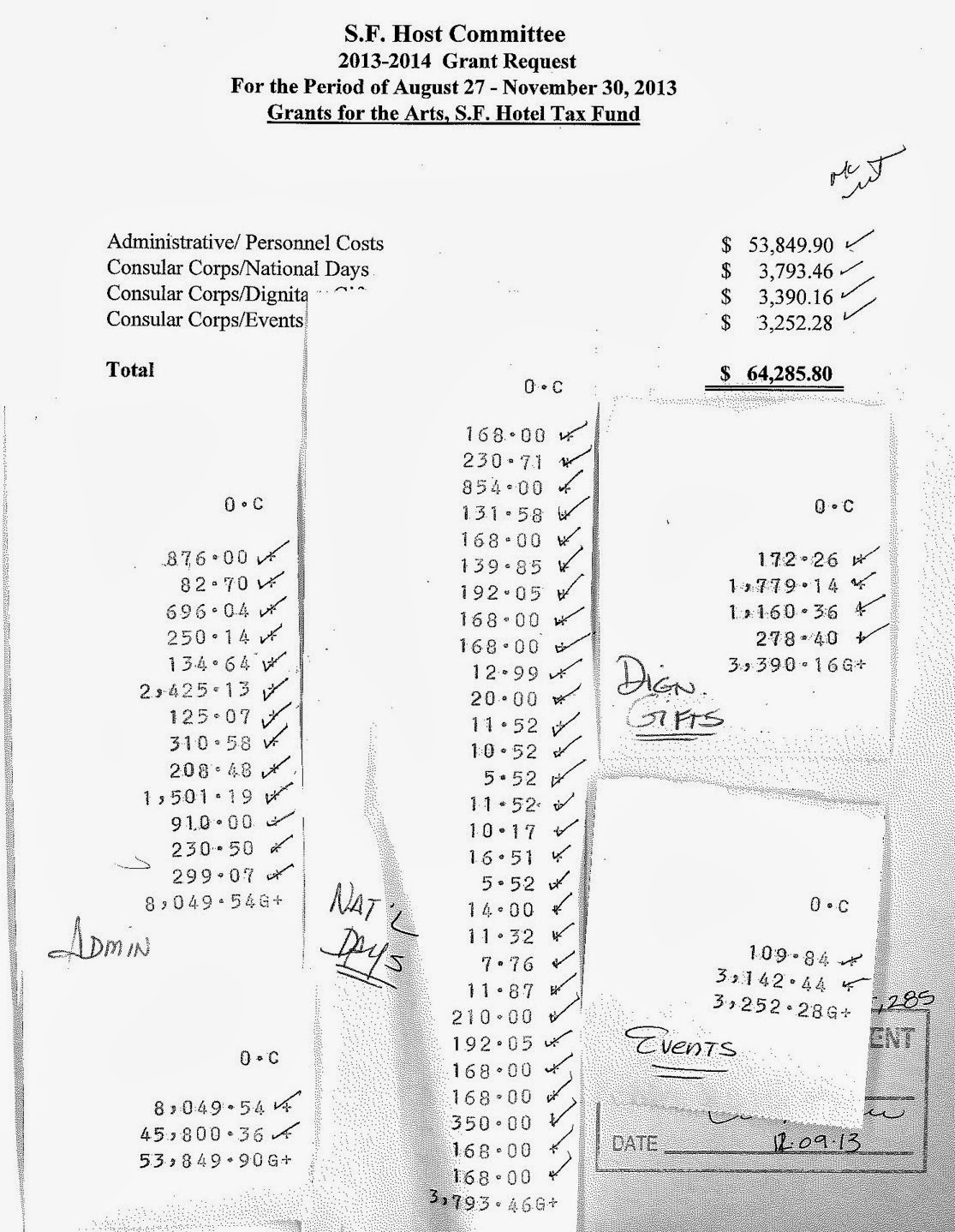 The GSA documents for FY 13-14 shed a bit of much needed sunlight on Shultz's nonprofit committee. This page shows that Shultz spent $64,300 from August through November and all she submitted as proof of how the public money was spent were copies of adding machine tapes. I guess only the little people have to itemize how they use City dollars and no receipts or invoices are necessary justification needed from Shultz. 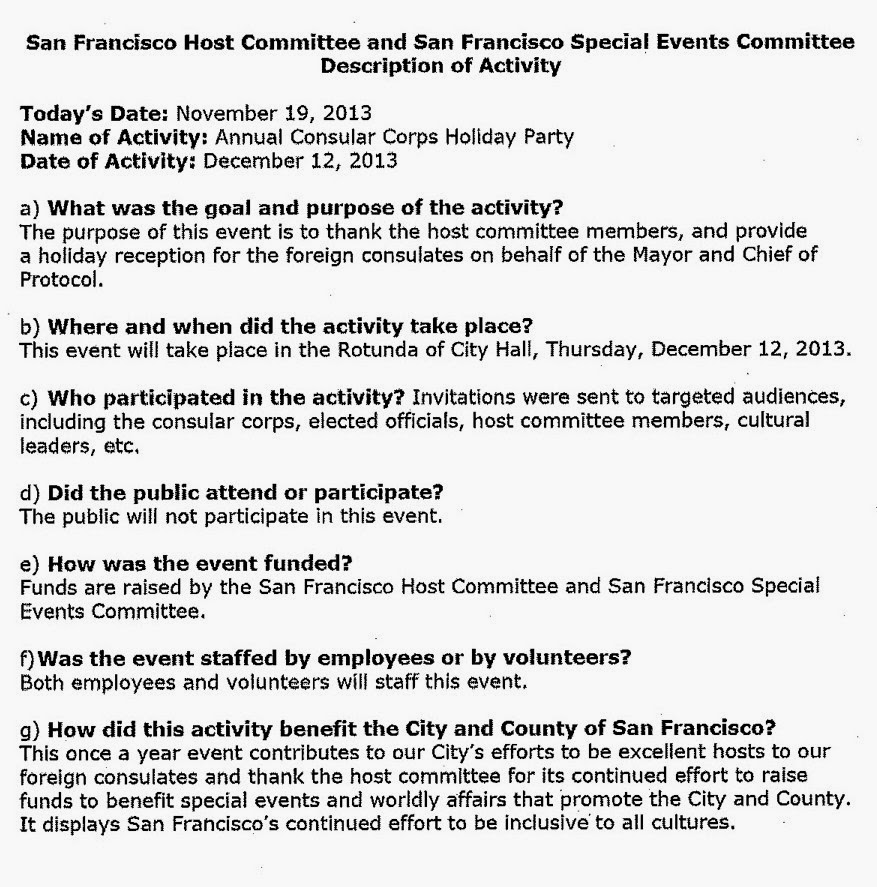 This page informs us that a portion of the taxpayers' dollars were used for the annual diplomat's soiree Shutlz held at City Hall for hundreds of her dearest elite friends and foreigners, an event slavishly covered every year by Shultz's own stenographer at the SF Chronicle which never questions the cost or funding source of the parties.

The purpose of the event was to be excellent hosts and other nonsense. If we taxpayers don't fund Shutlz's private parties for her dignitary pals from which we are excluded, and no parties were held, I seriously doubt all the consulates in town would up and move to another West coast city. 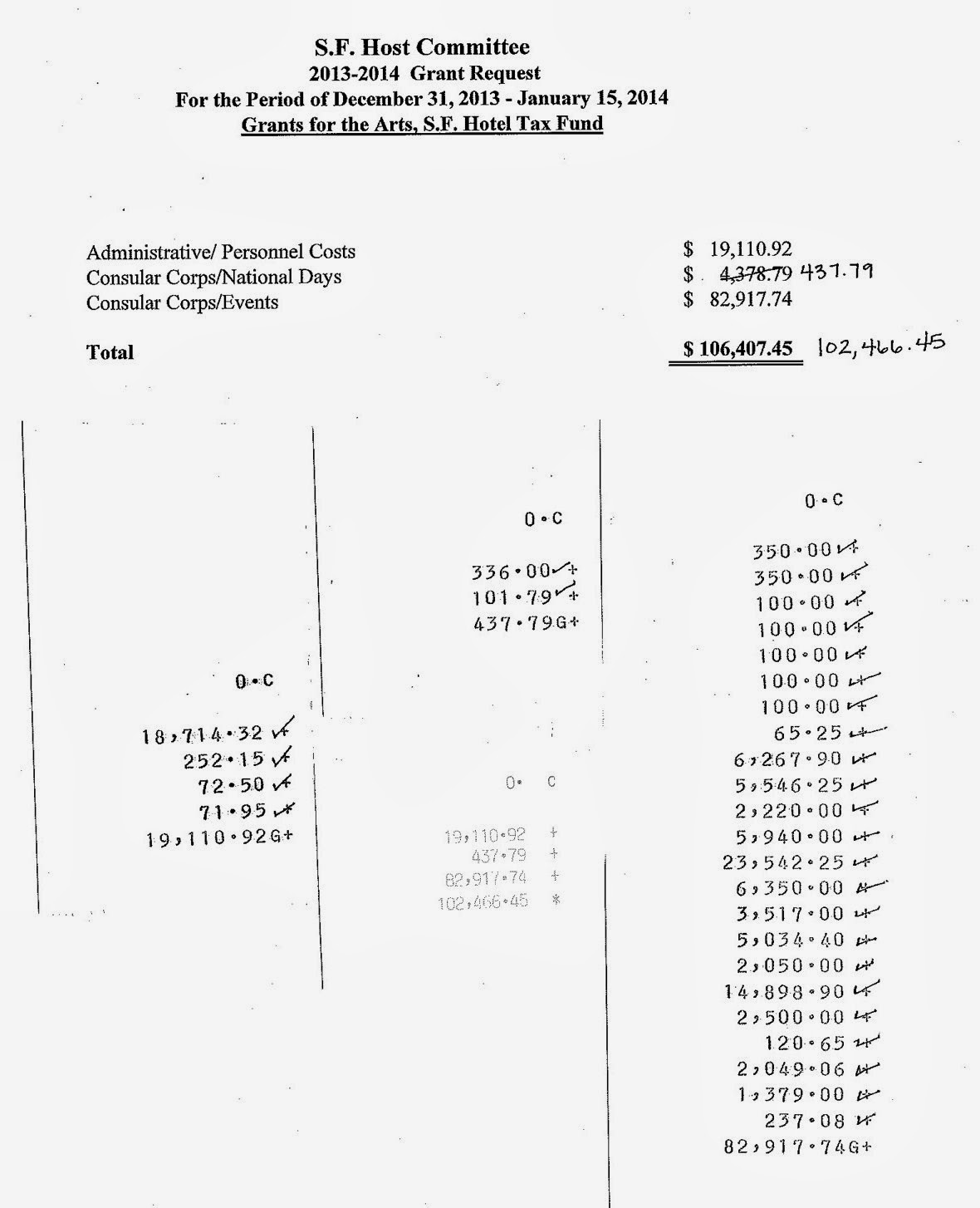 Here we see another page of Shultz's submission of figures on adding machine printouts and not a single itemization of how she spent $106,400 of taxpayer funds. Again, no itemization from the SF Host Committee as to precisely what was purchased for the Shultz soiree.

This is some racket Shultz has arranged for herself. She skirts Prop F, receives City dollars to meet her entertainment needs and it's under the guise of maintaining good relations with foreign government officials based here. 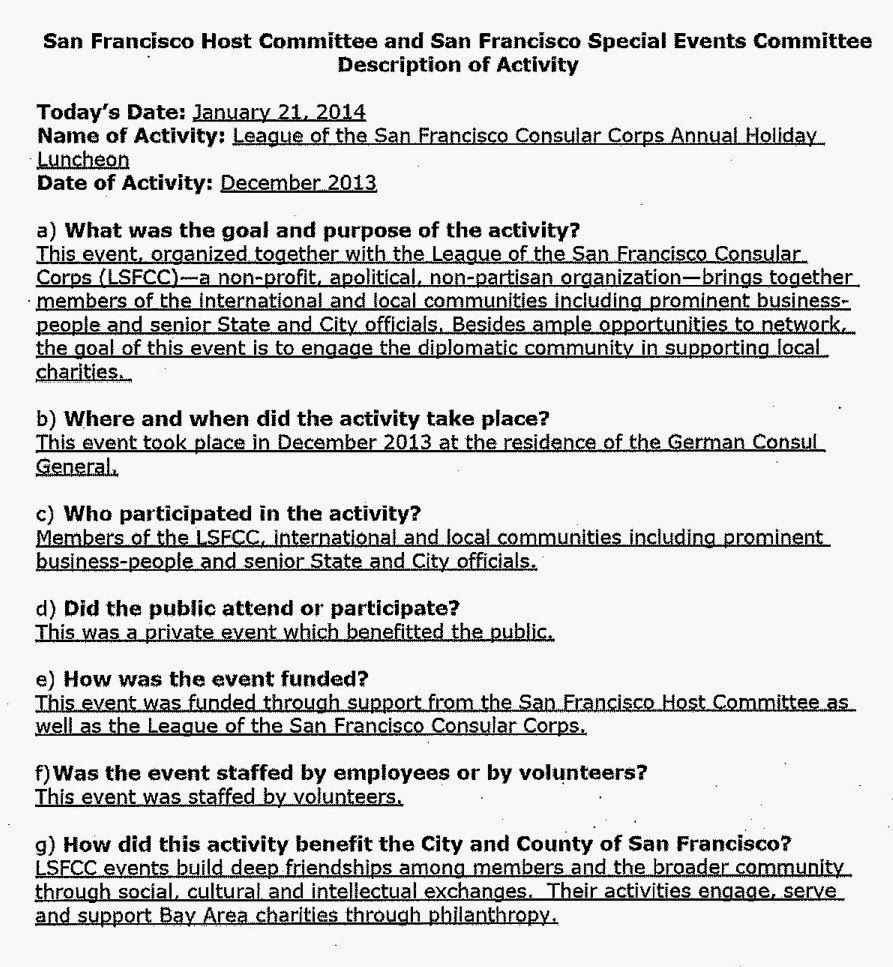 As if it's not enough for taxpayers to foot the bill of Shultz's holiday hootenanny at City Hall, we also pick up the tab for her separate holiday luncheon for the same bunch of diplomats and her socialite sisters.

There are so many angles to why this should be a mainstream news story. The flouting of Prop F, public monies for private parties, no itemization of costs and opaque benefits to the general citizenry, and the host committee is not holding two public meetings as required by law and is the subject of my complaint to the GSA.. Heck, it should also be of interest to the weakly alternative rags in San Francisco, but if the past is any indication of the future, none of these outlets will follow the money. Such is life in the big city!

Do yourself a favor and read the full document from the GSA from which I excerpted the above four pages.

Posted by Unknown at 3:48 PM
Email ThisBlogThis!Share to TwitterShare to FacebookShare to Pinterest