Did 10 People in New SF Chronicle Pee-Room Pix Permit to be Snapped?

A reader tipped me off to a story and photos I had not seen when they originally ran in the San Francisco Chronicle on October 3, 2013.

Recall that for more than a week I've been blogging and complaining about a March 9, 2014, Chronicle story by Heather Knight about smelly homeless people at the main branch of the public library down on Grove and Market Streets, featuring two photos credited to Lea Suzuki of homeless women changing clothes and a female janitor in the public restroom.

The City Librarian Luis Herrera's spokeswoman Michelle Jeffers has stated in writing that permission was not granted to Suzuki:

I can tell you unequivocally that the San Francisco Chronicle and its photographer Lea Suzuki did not have San Francisco Public Library’s permission to take photographs in the bathrooms at the Main Library. [...]

It appears that Ms. Suzuki violated these [SFPL] rules, snuck in with a camera and surreptitiously took the photographs that appeared in the newspaper.

The SF police department has assigned Sgt. Anthony Damato to investigate if state penal code section 647(j)(1) prohibiting taking photos in public restrooms was violated, and I am now requesting that they open a separate investigation into the paper's earlier photos of men in the main library's restroom.

Is there a conspiracy among Chronicle editors, writers and photographers to stalk smelly, homeless or other patrons of the library's public restrooms and in the process break the law as part of their for-profit and corporate publication? Evidence clearly suggests the answer is yes.

At the same time, this pattern of reporting the same basic point - enforce laws and code of conduct rules on others - shows hypocrisy from the paper that violates a law and library rules in pursuit of their stories.

Let's go over the ones with men who are not named, most likely are homeless and whom it appears did not give their names to Macor. All italicized captions are in the original article in the Chronicle. 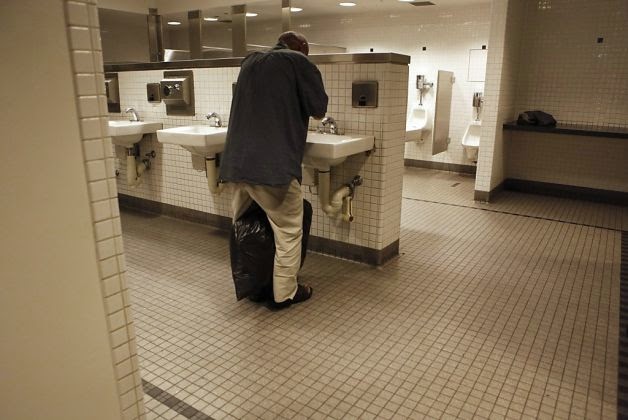 A visitor to the men's restroom at San Francisco's main library on Tuesday Oct. 1, 2013, in San Francisco, Calif.

No indication that the individual gave permission to be photographed or gave his name to photographer Macor. 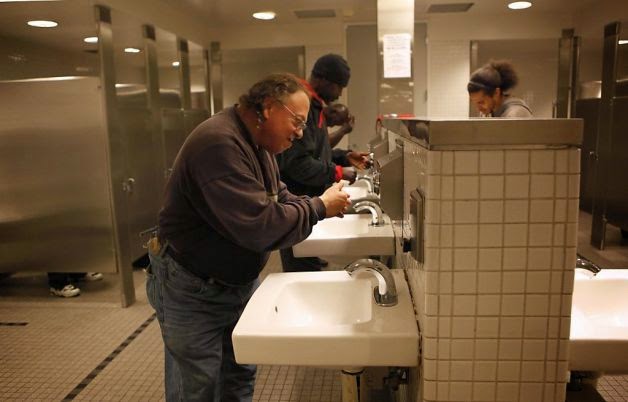 Paul Ross who comes to the library to buy books takes a break at the men's restroom at San Francisco's main library on Tuesday Oct. 1, 2013, in San Francisco, Calif.

While the man in the foreground is named and may have permitted being photographed, there are three other men using the sinks, and on the left the sneakers and pants of a man presumably sitting on the toilet having a bowel movement are visible under the grey metal. Did Maco get each one's permission to be photographed? 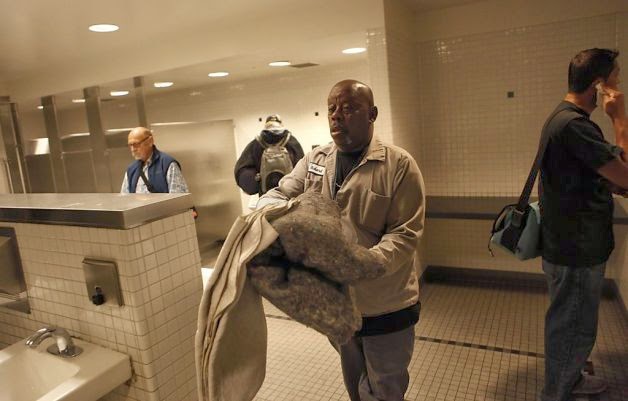 Directly behind Mathews' shoulder is a man standing and probably using the urinal, while there's another man on right and one on the left at a sink. No names for those three guys. 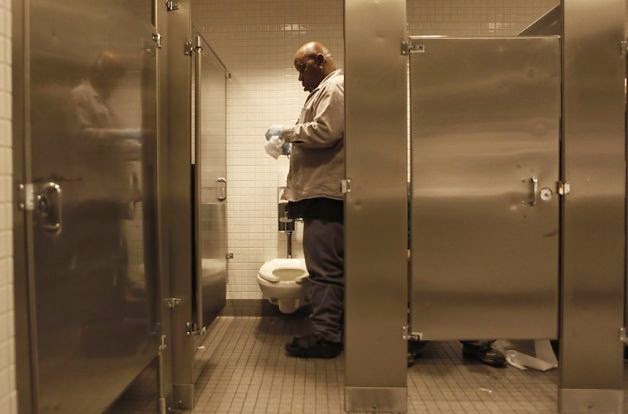 Again, Mathews is named, so maybe he granted permission to Macor, but what about the dude in the stall on the right giving consent for part of his person to be photographed while sitting on the crapper? 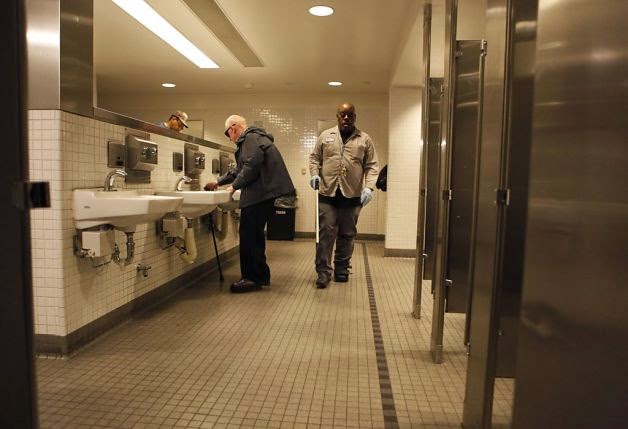 Custodian Richard Mathews searches for debris left behind by visitors to the men's restroom at San Francisco's main library on Tuesday Oct. 1, 2013, in San Francisco, Calif.

Mathews named again, but no names for the two men on the left at the sinks. Did they allow Macor to take their pictures?

Aside from questions about whether the ten unnamed men gave permission to be photographed, there's the separate matter of what the City Librarian did, if anything, about the Chronicle sending a photographer to lurk in the public restroom with the clear violation of the library's code of conduct.

In a six-month period, the Chronicle's staff have twice engaged in what I believe are potential violations of 647(j)(1) and for the sake of justice, fairness and equal application of the law, the appropriate law enforcement agencies and civic bodies must investigate how and why these photos were taken, and if laws and codes were broken.
Posted by Unknown at 9:48 PM
Email ThisBlogThis!Share to TwitterShare to FacebookShare to Pinterest