A hearty salute to investigative citizen journalist Seth Barron of the City Council Watch site for following the money that's flowed to the always-climbing-the-gay-Democratic-political-ladder Corey Johnson and reporting on his findings. Barron looked at plenty more pols in New York and who's sprinkling their bank accounts with greenbacks, and I feel a kindred spirit between us.

There simply are not enough watchdogs keeping tabs on politicians and a good number of them following the money, but don't blog or otherwise share their findings online. We'd have a lot more government transparency if only a handful more of citizen watchdogs put their research and questions and all on the web for everyone to read. Come on, people!

Spill some beans. As the recent indictment of California state Sen. Leland Yee shows, there are an endless array of folks talking now about what they supposedly knew before his scandal of gun running and money laundering accusations became public knowledge. Speak out before the politician gets too corrupt or cozy with elite power-brokers or indicted and do democracy a huge favor. 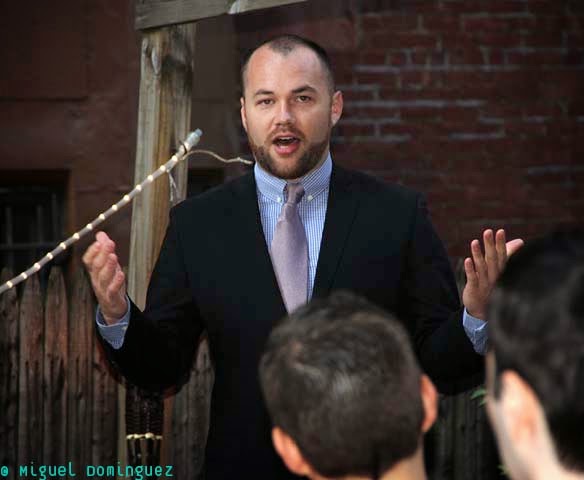 Read these excerpts from Barron's reporting earlier this week at the City & State news portal:

New York City Councilman Corey Johnson, who represents Chelsea, the West Village and Hell’s Kitchen, threw himself an elegant inauguration costing upwards of $30,000, including $1,500 on flowers.

Rather than sourcing this business to one of his district’s many high-end florists, or to the city’s flower district on 28th Street, Johnson hired his chief of staff’s mother, who owns a flower shop 150 miles away in Norwich, Conn., to provide the floral arrangements for his swearing-in celebration. The councilman also spent $14,000 on food with a caterer based in New Jersey.

Johnson’s chief of staff, Jeffrey LeFrancois, did not respond to questions as to why his mother’s business was chosen to supply the Johnson inaugural with its table arrangements.

According to the city’s Campaign Finance Board’s rules, Transition and Inauguration (TIE) funds are not matched by public funding, so elected officials are free to distribute the money they raise for those purposes largely at their own discretion. As such, TIE funds are a gray area of political financing, not just because they are mostly spent on parties, but also because they do not receive a lot of scrutiny. [...]

Johnson also accepted $2,500 from Judith Rubin. Rubin is the wife of Robert Rubin, Clinton’s secretary of the Treasury. Secretary Rubin oversaw the dismantling of regulatory oversight of the financial industry, and urged caution regarding the regulation of credit derivatives. [...]

Is there a contradiction inherent in a supposed “progressive” who aggressively touts his family’s labor background partying on the dime of a person who perhaps typifies the “1 percent”?  [...]

Are the progressives who now constitute the Council leadership any different from the typical big city machine politician with a wide smile and an open palm?

Excellent work, Seth! Keep asking those tough questions and maintain pressure on Johnson and his staff to provide answers.
Posted by Unknown at 5:56 PM
Email ThisBlogThis!Share to TwitterShare to FacebookShare to Pinterest