At about 5:55 pm tonight, I asked the uniformed on-duty policeman who handles administrative tasks for the police commission if they had heard from the missing members about when they would show up and a quorum met so the meeting could begin. Instead of answering my question, the cop said they weren't missing, so I asked if the tardy members had used that great new invention call the telephone to let us know when they'd be arriving. He replied that the meeting would start soon.

Maybe ten minutes later, I was in the hallway and folks exited the hearing room loudly announcing the meeting was cancelled. So much for all commissioners to keep their promise to the public to fulfill their duties. 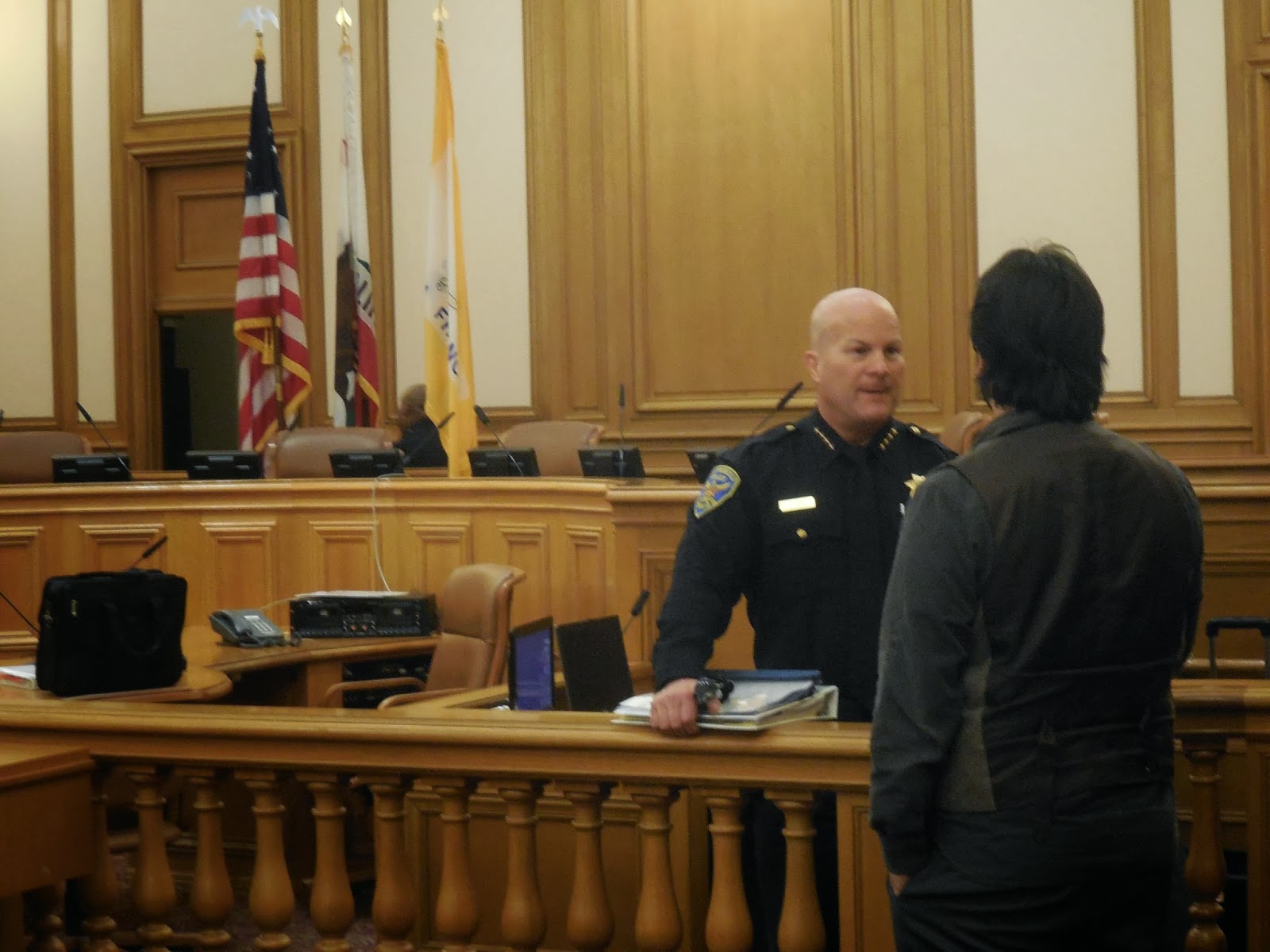 (Chief Suhr speaking to a member of the public after the hearing was officially declared kaput.)

Among the missing who didn't show up were vice president Julius Turman, Petra DeJesus and Joe Marshall. The cancellation would have been a small easier to accept if those commissioners had used communication devices and called in to apologize for their absence.

As I gathered my belonging president Thomas Mazzucco apologized to me because of the cancelled meeting and said to come back next week.

Earlier today, I emailed Chief of Police Greg Suhr and eight of his staffers including the public affairs officers demanding a probe into whether SF Chronicle photographer Lea Suzuki and others at the paper had violated state penal code section 647(j)(1). That law prohibits the snapping of photos in public restrooms, as Suzuki did, for her pictures accompanying a story about the breaking of rules of conduct at the main library.

Meeting or not, my formal written complaint with evidence was submitted to the police department and the district attorney's office today. Let's see how it's handled.

A crime may have been committed against the three people in the photos and questions must be raised why local law enforcement agencies have failed thus far to investigate Suzuki potentially breaking the law. Maybe it's because the victims who had their privacy violated are homeless or clean the library's restroom. Perhaps these agencies don't want to antagonize the for-profit Hearst corporation.

There's also the slim chance (ha!) that Lady Justice lifts up her blindfold to see who is violating section 647(j)(1) before any investigation is launched.

I'd hoped to use public comment to display the Chronicle's possibly law-breaking photos, as I did yesterday at the weekly Board of Supervisors' meeting at City Hall. About thirty-seconds into the excerpted video above, you'll see my presentation and I'll just have to show up at the next police commission hearing to repeat it.

In the room tonight was a reporter for the weakly Bay Guardian, Joe Fitzgerald Rodriguez, with whom I am unacquainted. His paper, when this blogger faced a legal and political vendetta exacted by an ambitious elected official for a photo taken in a public restroom, several times trashed me. No surprise there.

Now that the Chronicle has done the same thing as I, the weakly which usually is all over hypocrisy and the Chronicle and their cozy relationships with law enforcement agencies, the Bay Guardian has laryngitis. Even if the weakly couldn't hold its arrogant progressive nose to note the vast difference between my situation and that of Suzuki, I would expect them to pipe up about the photos in the Chronicle being used to further stigmatize the homeless patrons of the library.


Some of the police commissioners are tardy, and the commission is not at quorum. @MichaelPetrelis is not happy. "Have we heard from them?!"
— Joe Fitz Rodriguez (@FitzTheReporter) March 13, 2014

Rodriguez made a second tweet from the meeting, this time noting my question to the commission about their absent colleagues. He's put more words out about me then the demonizing of homeless women in the Hearst rag, a population he and his employer usually defend from sensationalistic media coverage. Let the record show the Bay Guardian ain't said one word taking the major daily to task.

Posted by Unknown at 9:43 PM
Email ThisBlogThis!Share to TwitterShare to FacebookShare to Pinterest