This is the third time I've found separate stories about the homeless in the San Francisco Chronicle and one of the photos is of someone in a public restroom, and the question must be asked if all the persons in the pictures gave permission to be photographed.

Today I discovered an August 5, 2013, story by Kevin Fagan about the formerly homeless and how they survive, hold on to their housing and earn a few bucks, and Chronicle photographer Brant Ward posted a photo of a man using a sink in a public restroom near Fisherman's Wharf and directly behind is a visible portion of a urinal. A man stands in front of it, his back to the camera and his head is cast downward as if he's looking at his dick. Did he give permission to be photographed? 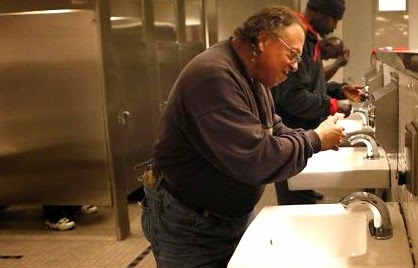 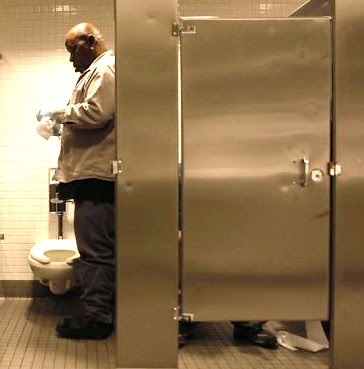 In October 2013, the Chronicle's Vivian Ho reported on the odors of the public restrooms at the library and staff photographer Michael Macor provided five photos of ten folks, some of them homeless, and no indication given as to whether they consented to be caught on his camera. Two of the images showed men sitting on the toilet behind metal partitions and their pants around their ankles and footwear visible. Can we see independent evidence that these men have bowel movements and others in the images granted permission to be caught on camera? 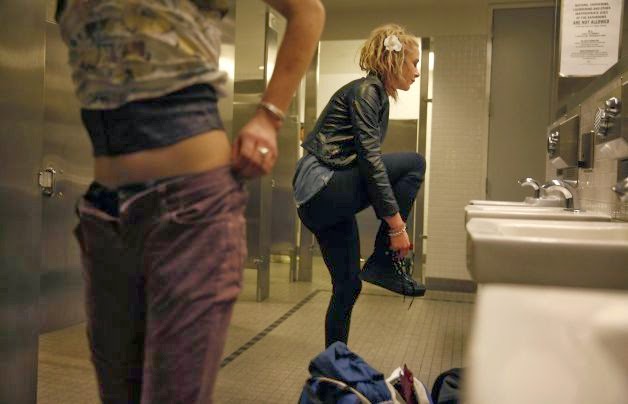 Earlier this month, the paper demonized smelly homeless people at the main library with a Heather Knight story and two photos by Lea Suzuki of homeless women and a janitor in the public restroom. One image shows a young woman's midriff section, her pants unbuttoned and the top of her underwear. Has anyone spoken with these individuals to verify they gave consent to the Chronicle employee?

These three photo series are not isolated instances. They are part of a pattern of SF Chronicle photographers on assignment from editors, twice probably tasked with lurking in the restrooms, and are certainly violations of public library prohibitions on photography in the building and the images could be breaking state penal code section 647(j)(1).

That statute appears to apply in each of the instances and yet none of the photographers have been charged by the District Attorney with the violating privacy law, the police department is investigating only the Suzuki episode and as far as I know has not opened investigations in the Macor and Brant photographs.

I'm starting to wonder if the law enforcement agencies in San Francisco only investigate potential violations of 647(j)(1) when the person photographed in a public restroom is a powerful and ambitious politician who plays a pivotal role in determining the agencies budgets, and if the politician wants to exact a vendetta against an adversary and is willing to abuse if elected office to do so.

Yet when the major daily consistently snaps and publishes similar public restroom photos but of politically weak homeless people, those agencies don't appear to invest the same personnel time and City dollars on investigations and if warranted, indictments and prosecutions.

Could there be double-standards at play and is Lady Justice in San Francisco lifting up her blindfold regarding privacy and photos in restrooms?
Posted by Unknown at 10:40 PM
Email ThisBlogThis!Share to TwitterShare to FacebookShare to Pinterest