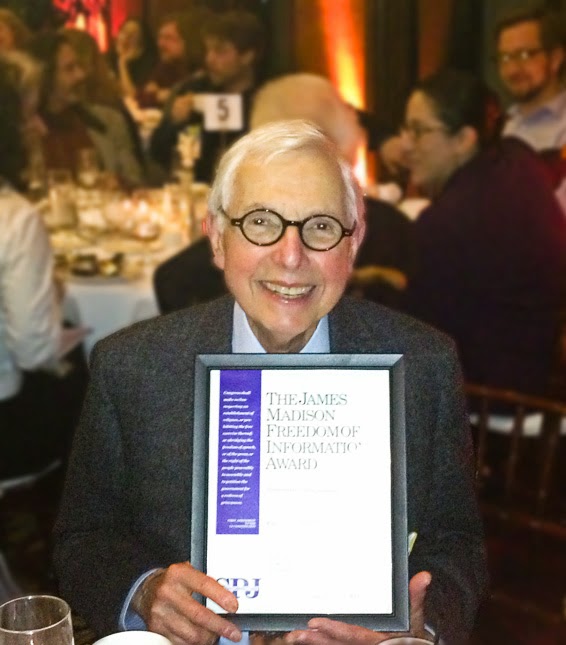 [UPDATE: Scroll down to read it]

The stable of big egos who write for the weakly Bay Guardian are well-known for ignoring important government accountability stories if their friends are not pushing the stories. The paper's endorsements in the 2012 race for Democratic County Central Committee included Matt Dorsey, a staunch anti-sunshine advocate and public affairs deputy for City Attorney Dennis Herrera. A year prior, the New York Times ran an unbalanced article about the Sunshine Ordinance Task Force, with the Bay Guardian's endorsee trashing it:

Matt Dorsey [...] said in an e-mail, “The task force has degenerated into a rogue, lawless jury that beats up on city departments and tries to get conscientious public employees fired.” Mr. Dorsey and other city public information managers said they spent an extraordinary amount of time and resources complying with the ordinance. They described task force hearings as a tedious kangaroo court.

And the Bay Guardian endorses the guy, despite clear hatred of an important civic panel!

This weekend, the incredibly dogged and insightful and intelligent longtime open government advocate Patrick Monette-Shaw, who's also my friend, circulated an open letter to Steven T. Jones, the associate editor of the paper, about their failure to give proper attention to an important sunshine lawsuit.

Patrick, with well-earned righteousness, excoriates the paper for not only failing to understand the reasons that led plaintiff Allen Grossman, a true transparency hero, to file his suit but he also slams the alternative weakly because they got scooped by of all publications the San Francisco Chronicle, hardly a bastion of chest-beating progressive values.

Thank you, Allen and Patrick, for allowing me to stand on your shoulders and share excerpts from Patrick's letter to the Guardian:

I have reason to believe that on March 4, a Sunshine advocate and open-government wizard contacted the Bay Guardian requesting that you include in your planned FOIA issue, an article focusing on Allen Grossman’s lawsuit against the Ethics Commission that is languishing in the Appellate Court. One way or another, the case may turn out to set precedents in the City affecting the public’s right to know what our government is doing in our names, and the level of secrecy the City seeks to preserve. [...]

So I was shocked to learn that on March 10, that you had responded to a request for coverage that the Guardian would not “get into this lawsuit at this time. It's just way too narrow and wonky to devote a whole story to, and frankly I think you'll have a hard time convincing a judge that the Sunshine Ordinance trumps attorney-client privilege.”  [...]

Then, I was surprised to see that when the Guardian hit news racks on Wednesday, March 10, that the best [your colleagues] Rebecca Bowe and Brian McMahon could work into their “Glimmers of Sunshine” article was a single 20-word clause alluding to Grossman’s case [“… plus a lawsuit revolving around the city’s refusal disclose [sic: to disclose] how the City Attorney’s Office advises agencies on Sunshine Ordinance interpretations, …”]. [...]

Knowing in advance of the Guardian’s demurral to report (however extensively or not) on Grossman’s case in your annual FOI issue, I was stunned turning to Wednesday’s San Francisco Chronicle the same day the Guardian hit news racks. The Chronicle’s Bob Egelko published a several-hundred-word article describing Grossman’s case in the Appellate Court.

How could the Chronicle have scooped the Guardian reporting on Grossman’s case?

As another prominent open government advocate noted yesterday, it’s ironic that we’ve reached the point where the Chronicle does a fairly major story reporting on a [very major] Sunshine issue, while the Bay Guardian does not.

“Progressives” being scooped by “moderate” conservatives is all too telling. [...]

Just how far has journalism fallen that the Guardian’s annual FOI issue mentions just 20 words about Grossman’s case, and is scooped by the Chronicle?

May I suggest that you read my article, “Sandbagging, Legal Fairy Dust, and Double-Speak”? Hopefully, there’s a nugget or two in my article that may help convince you Grossman’s case is not at all “wonky.” His case involves whether all San Franciscans, including the Guardian, will be able to rely on the Sunshine Ordinance if he prevails.

This is about the very survival of the Sunshine Ordinance.

UPDATE: This is from Tim Redmond:

Um, Michael, I scooped both of them .... http://48hillsonline.org/2014/03/10/legal-case-could-invalidate-part-of-sfs-landmark-sunshine-ordinance/ By about three days.
Posted by Unknown at 6:24 PM
Email ThisBlogThis!Share to TwitterShare to FacebookShare to Pinterest