In February 2013, San Francisco's most pretentious, boring gay writer and then-staffer of the Bay Guardian Marke Bieschke penned a cover story on the nascent rebirth of a local chapter of the AIDS Coalition to Unleash Power titled "All The Rage". He's now the editor of the weakly alternative paper.

Placing a heavy burden on the group, he asked "Can the rebooted ACT UP/SF mobilize a new generation?" He would have been wise to ask if it could just survive never mind have the impact the ACT UP phenomenon had in the plague years.

More than a year later, for all intents and purposes the chapter is so dormant I can't recall the last time I head of it doing anything of note. What went wrong and was it just another instance of the Bay Guardian inflating a small and important progressive development into a large imaginary force of change that it simply can't sustain?

I don't know and my contact with the group was limited to older members I knew from other ACT UP chapters. Wonderful folks with book and street smarts, good humor, and still committed to activism, but like the younger members they weren't focused on accountability issues with AIDS Inc, such as executive salaries and fiscal stewardship. I kept my distance and wished the chapter all the best.

When ACT UP/SF announced it was hosting a reunion in conjunction with a similar gathering back in New York City in June 2013, I promoted and attended the reunion and had a fabulous time. 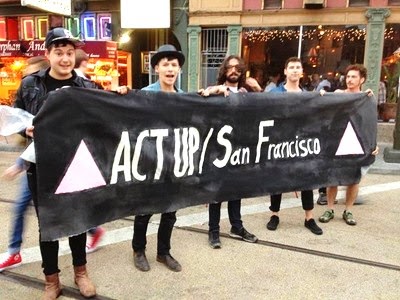 (Members of the revived chapter in 2012, displaying their banner in the Castro's Jane Warner Plaza. Courtesy photo.)

[In 2012], a 28-year-old sex worker and activist named Cyd Nova, along with others who had been involved with the Occupy movement, started contacting ACT UP veterans about the upcoming 25th anniversary of ACT UP that March. [...] Several of the attendees decided to start holding regular meetings and full-on reactivate the movement, reviving the name ACT UP/San Francisco. [...]

One of the less-emphasized aspects of ACT UP was its reverence for procedure and attention to order, its organization into multiple affinity groups and action committees: a trick learned from classical anarchism and the Civil Rights Movement. The young ACT UP/SF members I've met — there are about 25-30 core members — seem to have absorbed these techniques: they speak calmly and deliberately but candidly, seeking out consensus but unafraid to disagree. Their actions, too, seem deliberately organized and calmly executed. [...]

What's the agenda of a new ACT UP? Besides addressing the prohibitively high costs of AIDS meds — something most HIV-positive people with insurance may take for granted, a lack of awareness that drug companies can take advantage of by price gouging or delaying more cost-effective treatments, and leaving uninsured people scrambling and dangerously stressed as public programs are increasingly cut — and the lack of an HIV safety net for many immigrants, the new ACT UP/SF also gives priority to sex worker and housing issues. [...]

Speaking of the social network empire, their Facebook page is the only sign of life I can locate for ACT UP/SF. It's sad to see the demise of the chapter because there is a need for an independent group to engage in activism, but I don't know how you could sustain a chapter in these times with so many layers of AIDS Inc to overcome to have any serious impact and keep momentum going.

What we could use now is a followup piece by Bieschke and the Bay Guardian about what went wrong, and how Bieschke's grandiose and unrealistic wishes played into the demise of the chapter. Followup from the Bay Guardian, in general, and regarding ACT UP/SF falling short of a revival in particular? Quite a radical idea.

Posted by Unknown at 10:41 PM
Email ThisBlogThis!Share to TwitterShare to FacebookShare to Pinterest