Thanks to a public records request I filed last week, we learn that the executive assistant to the City Librarian Luis Herrera deemed the March 9 SF Chronicle photos of homeless women using the public restroom at the main library as "illegal". 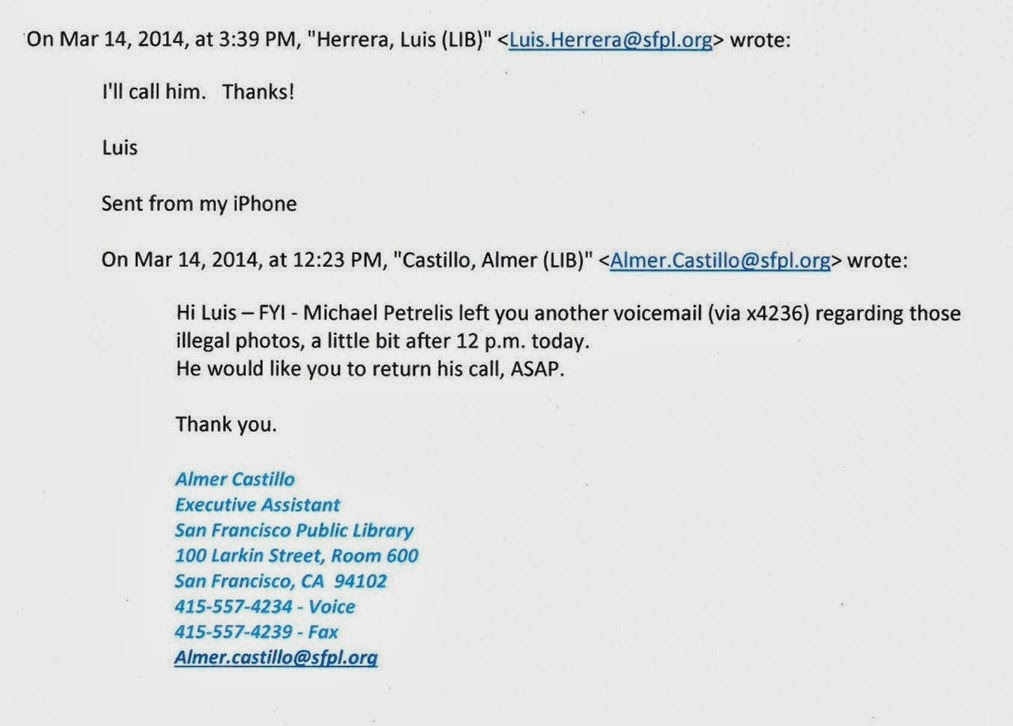 Those images were credited to the paper's staff photographer Lea Suzuki and the article, penned by Heather Knight, was all about levying heavy penalties against homeless folks who break library rules and the law. How ironic and hypocritical of the SF Chronicle to wage a continuing campaign to have rules and laws applied to the homeless, as the paper's photographers and assignment editors also violate rules and laws.

How interesting that the executive assistant to the City Librarian says the images are illegal, something not disputed in followup emails other City officials in the responsive records, and yet the library is way more concerned with ignoring me and not taking administrative or legal action against the SF Chronicle.

Then we have special assistant to Mayor Ed Lee for library and homeless issues, Hydra Mendoza, weighing in and saying an unidentified "they" have not resolved this whole matter. She also does not like that I'm blasting my email exchanges with various folks and she says it's "ridiculous" this has not been resolved.

This is the only email from her in the responsive public records I received and I don't know if she's verbally conveyed to the library administrators any concerns on her part or for the mayor, about potential violation of privacy for the homeless by the Chronicle or breaking of statutes and the library's code of conduct.

Mendoza asks if the Mayor's Office needs to do anything else about this matter, and I say yes, given that it was not just the March 9 photos but also the October 3, 2013, photo series of homeless and other men in the public restroom at the main library. Two of those images show men behind metal partitions sitting on toilets and another pic is of a guy using a urinal.

One reason this matter has not been resolved is because library officials and the mayor's special assistants including homeless czar Bevan Dufty, are more energetic about covering their assess than addressing the various legal and ethical concerns I'm raising. This matter is not going away.
Posted by Unknown at 10:43 AM
Email ThisBlogThis!Share to TwitterShare to FacebookShare to Pinterest