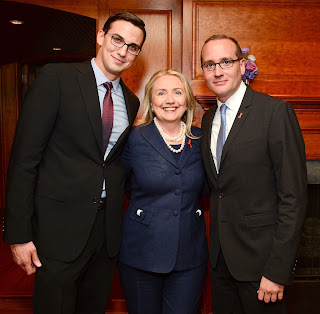 (Secretary of State Hillary Clinton was honored at a private reception in Washington on July 23, 2012. Flanking her on the right is Chad Griffin and his husband Jerome Fallon on her left. Credit: Michael Kovac, Getty Images.)

The presidential election of 2016 is a few years down the road, but that is not stopping the executive director of the Human Rights Campaign, Chad Griffin, from putting his organization's resources and reputation behind presumptive candidate Hillary Rodham Clinton. Griffin has graciously shared with me his short statement about a significant development from HRC, one that positions the organization as a very early backer of Clinton's potential White House run in 2016:

It is with tremendous pride and deep admiration that today I am pleased to announce the Human Rights Campaign has formed the Hillary Rodham Clinton 2016 Super PAC.

Our main goal is to persuade my friend and a true ally of our community to again run for the Oval Office and this time, with the support of millions of LGBT votes and dollars, take up residence once more at 1600 Pennsylvania Avenue as America's first female President.

Our recent nearly six-minute video showcasing Hillary Clinton's invaluable support for marriage equality and other LGBT concerns, which we were delighted to underwrite and produce for her, is just the first of many opportunities we envision undertaking for her benefit. The video has been viewed more than 345,000 times on YouTube.

We share it again because she and the video are simply fabulous:

My appearance in March on MSNBC's Chris Matthew Show, gives you an idea of how we intend to use free media to rally our community behind Hillary Clinton:

We anticipate many such media opportunities as the Hillary Rodham Clinton 2012 Super PAC is developed further. Our friends at MSNBC, Thomas Roberts and Rachel Maddow, and Don Lemon and Anderson Cooper at CNN, who already cover the Human Rights Campaign with deference and much-appreciated friendliness, are on board to assist us.

As veteran Washington lesbian powerbroker Ellen Malcolm has shown, early money is like yeast and in our rapidly evolving political environment HRC's board and executive leadership team are convinced it is not too early at all to come out in 2013 fully backing Hillary Clinton for President. 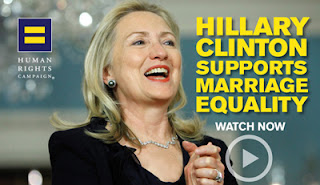 In closing, let me say the time is now for you to join us in this crucial project and help this HRC to put the other HRC where she belongs -- in the Oval Office!
Posted by Unknown at 12:30 PM
Email ThisBlogThis!Share to TwitterShare to FacebookShare to Pinterest