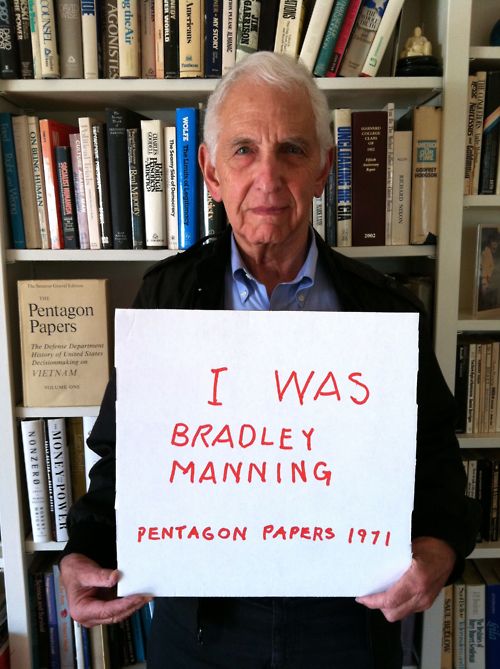 That's a faux headline, but one that pretty much sums up the militaristic political thinking, gay marriage uber alles and the corporate mentality at San Francisco's Pride Committee.

To recap, the Bay Area Reporter, which is more and more a mouthpiece for Equality Inc, reported on Thursday that the SF Pride leaders had chosen whistleblower hero and homosexual Bradley Manning to be a grand marshal. The problem was a rogue volunteer gave the paper bad info and SF Pride has rescinded the grand marshal honor that was never really given to Manning.

If you're not into guns with rainbow stickers and gowns at marriage ceremonies and gushing over alcohol corporation and corrupt banks and saluting the egos of an endless parade of queer and straight politicians, there's not been much reason to participate in the official Profiteering Off Pride events at the end of June.

Think about it. Mary Cheney and Heather Poe would be the ideal Grand Marshal Couple with the crew ruining, er, running SF Pride.

Until Manning upset the marriage and military agenda of SF Pride, the forces at Equality Inc were pushing the anticipated Supreme Court decisions on gay marriage as THE reason to be at Pride this year.

Now, with SF Pride handing their legions of critics and Manning supporters, and queers fed up with Equality Inc ignoring economic justice issues for those of us not interested in getting hitched or shooting innocent Afghanistan people with drones, a long overdue debate about the Gay Agenda in San Francisco is happening.

A presser is being planned for Monday at SF Pride's offices. Details coming soon.
Posted by Unknown at 12:23 PM
Email ThisBlogThis!Share to TwitterShare to FacebookShare to Pinterest