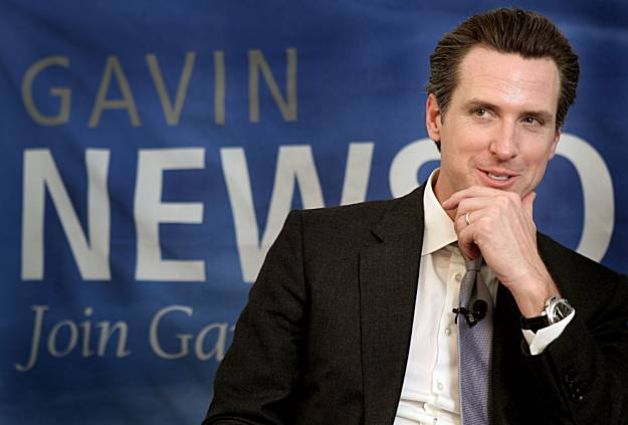 California's lieutenant governor, when he was mayor of San Francisco, has played an integral role in America's battle over gay marriage. In February 2004 Gavin Newsom rocked the world by tweaking local law to allow gays to marry in this city, an act that has lead to a Supreme Court case.

Last week, in his capacity as an elected state official but one who is not a plaintiff in the Prop 8 lawsuit nor is he on the plaintiff's legal team, Newsom charged the taxpayers for some of his expenses incurred in order to be present at the Supreme Court hearing.

According to Chris Garland, Newsom's chief of staff, here are the details, emphasis added:

The total cost of the LG's travel is $1,216.76. This breaks down as $703.80 for roundtrip airfare and $512.96 for 2 nights hotel accommodations. The LG does not receive a travel per diem and is not seeking reimbursement for meals or any other expenses related to his state travel.

I followed up with questions about other activities during Newsom's short stay in DC and why exactly taxpayers were footing his bill, when he's not a party to the case. Garland replied:

While in DC the LG did several media appearances both at the Courthouse and in studio with: MSNBC, CNN, CNN International, Bloomberg TV, KTVU's reporter on location in DC, LA print and radio media, the Washington Blade and several local CA radio and print media outlets.

Unfortunately, Newsom's office has not provided me with an explanation why public dollars were used for him to be at the Supreme Court and also conduct media interviews.

I believe it was improper of the lieutenant governor to charge any part of this trip to California's taxpayers. It's my hope that he repays the $1,200 to the state coffers. He has enough private wealth to pay for the airfare and hotel costs of his visit to DC.
Posted by Unknown at 12:02 PM
Email ThisBlogThis!Share to TwitterShare to FacebookShare to Pinterest

This comment is from my friend Melanie Nathan, who had trouble posting it:

"I spoke to Gavin Newsom on the steps of SCOTUS. I was happy to see him there. He got a lot of attention by the media when they saw him standing there and he was able to deliver very important answers to questions - I overheard the NPR interview he gave as I stood next to him. I feel that he was an integral part of our quest for marital equality and that his presence there as an official of the State of California who was well informed to provide media answers was well paid for. By the way my trip to DC cost a lot more than $1200 - I imagine he might have funded some of it himself. However as always I thank Petrelis my friend for keeping everyone on their toes. "

Happy to share your comment, Melanie. Be sure to read Melanie's blog, where she covers tons of foreign queer news: