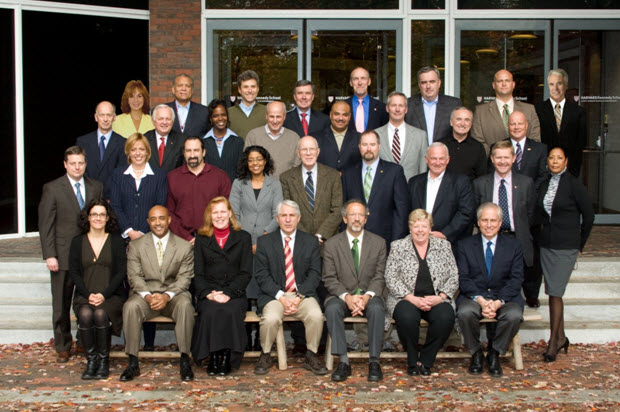 (Members of Harvard's Executive Session on Policing and Public Safety pose for a group photo. DA Gascon is in the back row, on the far right. Credit: Harvard University.)

Here's the latest news in my campaign sunshining the travels of San Francisco's elected officials and who pays for their trips, and why they are traveling.

I emailed Christine Cole, who is the Executive Director of the Program in Criminal Justice Policy and Management at Harvard Kennedy School, about her Executive Session from May 31 through June 2, 2012, at which our DA spoke. I learned about this because the session was on the DA's calendar.

My questions had to do with if Harvard footed the tab for the DA and anyone else on his staff who may have been on the junket with him. Cole wrote back:


George Gascon was invited as one of 29 participants in a very select group for an executive session. He, along with all the others, with the exception of federal employees are reimbursed for reasonable ground transportation costs, and food not provided by the event up to the federal per dime for Cambridge. We pay directly for accommodation and air. The DA did not receive compensation for attending. He did not have staff accompany him to my knowledge. The costs are covered on a federal grant.

Gascon has not filed a disclosure form with the Ethics Commission about this educational, via a government grant, outside source paying for the trip, and I'm not sure if he's required to do so and I'll be in touch with the commission for further explanation.

That aside for the moment, regardless of whether an elected San Francisco official is legally required to disclose these junkets, in my view, it would be excellent civic accountability to the citizenry for all such trips to be made public on the official's web site.

Posted by Unknown at 2:52 PM
Email ThisBlogThis!Share to TwitterShare to FacebookShare to Pinterest