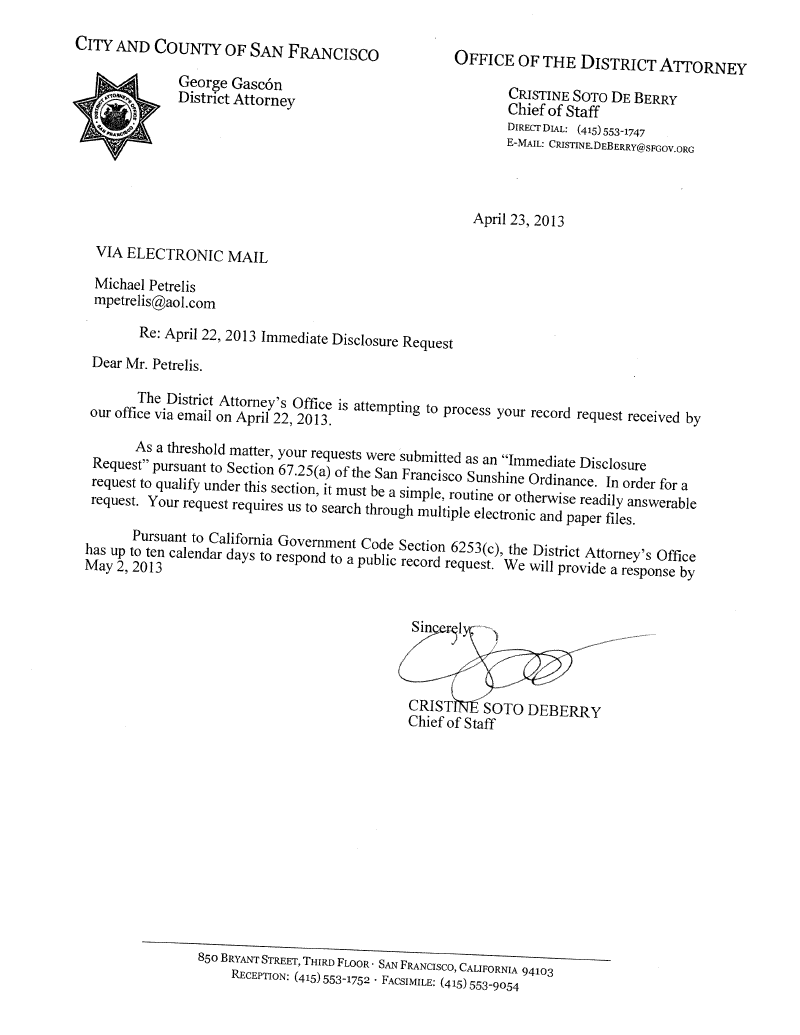 San Francisco's district attorney George Gascon's staff complied with my public records request for his daily calendar over the past two years, and in electronic format. After poring over the documents, I learned that the DA went on the road eight times, in addition to his June 2, 2012, trip to Phoenix, Arizona, paid for by an outside group.

The listing for that gift of travel from an outside source was the same as these trips in the DA's calendar. Who paid for these trips and did any staffers accompany him? I've filed an Immediate Disclosure Request for either the travel expense reports if the city footed the bill, or in the case of an outside group paying the tab the gifts of travel forms he filed with the Ethics Commission.

The eight trips in question:

1) January 24, 2011, to New York City for the Guggenheim Symposium at John Jay College;

5) May 10, 2012, to Long Beach to attend the California State University at Long Beach's Alumni Awards at his alma mater;

7) January 22, 2013, to Los Angeles to attend the Council of State Governments meeting;

The chief of staff for the DA, Cristine Soto Deberry, replied today with this note:

As a threshold matter, your requests were submitted as an Immediate Disclosure Request pursuant to Section 67.25(a) of the San Francisco Sunshine Ordinance. In order for a request to qualify under this section, it must be simple, routine or otherwise readily answerable request. Your request requires us to search through multiple electronic and paper files.

Pursuant to California Government Code Section 6253(c), the District Attorney’s Office has up to ten calendar days to respond to a public record request. We will provide a response by May 2, 2013.

So, the DA does not maintain a file just for costs of travel, whether on the city's dime or a sponsoring outside group. What does that tell you about how he organizes his public records and office?

Details aside, the larger matter here is the radical idea of requiring all department heads to post monthly travel disclosures for themselves and their agencies, along with sunshining any gifts or professional services at or above $100, and the daily calendars of the department heads.

The burden of following public dollars and public records for those cited above should not be on the citizen journalist, but a regular voluntary or legally required disclosing on the expensive web sites the public is paying the departments to maintain.
Posted by Unknown at 11:18 PM
Email ThisBlogThis!Share to TwitterShare to FacebookShare to Pinterest