A big thank you to the 200-plus individuals who participated in our 90-minute rally early this evening at the SF Pride office, on behalf of accused gay whistle-blower Bradley Manning. Not a single elected official, homosexual or straight, attended and a rally without a politician to suck up activist energy is a great rally. 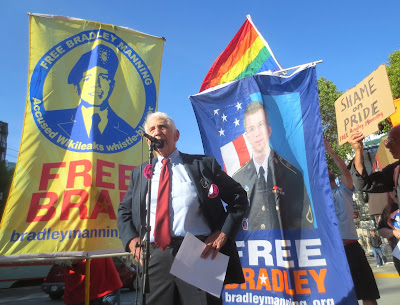 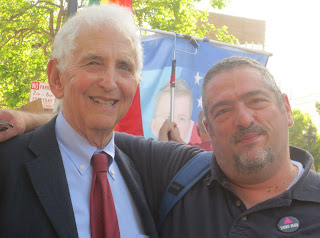 The man who leaked the Pentagon Papers, Daniel Ellsberg, spoke to rousing cheers and announced he would attend his first Pride March in June when he marches with the Bradley Manning contingent. Top photo, Ellsberg in front of Manning banners. Middle photo, the crowd listen and snapping pix of him. Bottom photo, yours truly giving his hero a friendly embrace.

Our call-and-response when like this: "They say court martial!" "We say Grand Marshal!" 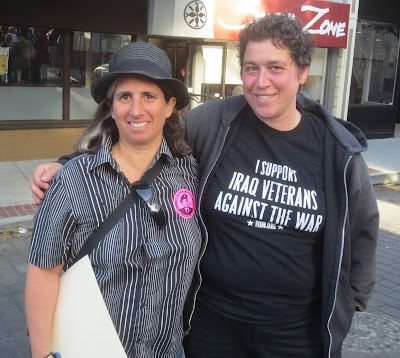 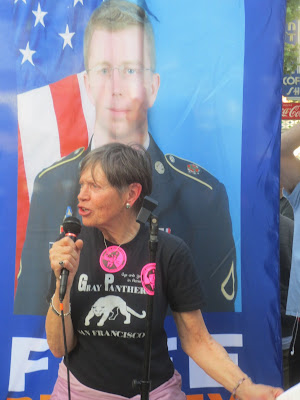 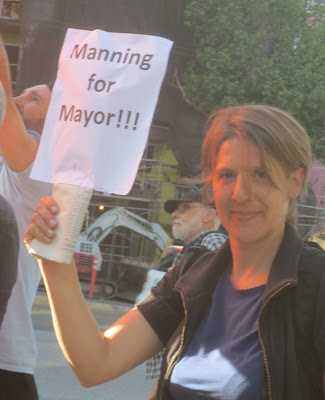 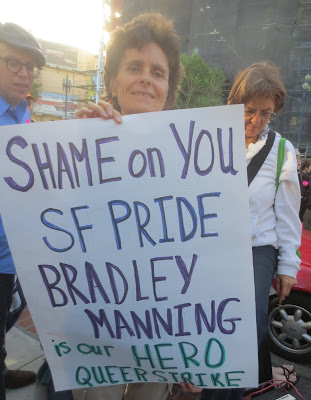 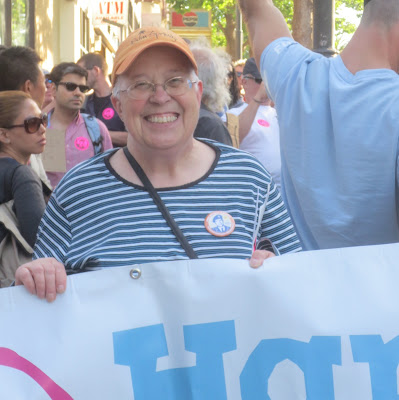 There was a strong lesbian and women's presence. Top photo shows rally co-organizer Lisa Geduldig and a pro-peace activist named Laurie. Second photo is of a proud self-described gay-and-gray member of the Gray Panthers, telling the crowd about queer sodomites arrested for breaking laws explaining our history and related to Manning. Third picture is one I took because I love how the woman decided her own message, then taped it to a rolled up newspaper making her sentiments known. Fourth picture features my friend Patrick Connors, and a longtime lesbian social justice activist who works at Rainbow Grocery and whose name I don't know. Fifth photo shows Sue Englander of the Harvey Milk Democratic Club after she said a few words to the throng. 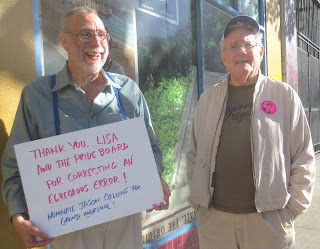 When I saw my longtime friend and occasional political sparring partner Chris Bowman, left, and I went over to him and said my reputation needing ruining so I wanted to be seen hugging him. Chris is with the Log Cabin Republicans and GOP. Glad he was there exercising his free speech rights with a sign praising SF Pride for reneging on the Grand Marshal honor for Manning. Standing with him was former Supervisor Harry Britt. Chris' sign reads: "Thank you, Lisa and the Pride board for correcting an egregious error!"

And the queer beat goes on . . .
Posted by Unknown at 10:54 PM
Email ThisBlogThis!Share to TwitterShare to FacebookShare to Pinterest

Nice comment posted on this:
"wonderful... sad that SF doesn't have the balls of Sydney... they have shamed themselves re SF Pride which now is SF Shame... by making Manning a Marshall and then recinding it along with the most vituperous rant I have ever experienced from a gay organization...Shame on them and thanks Australia!