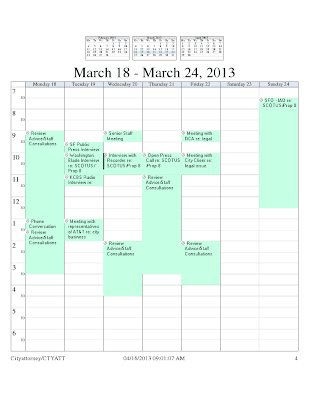 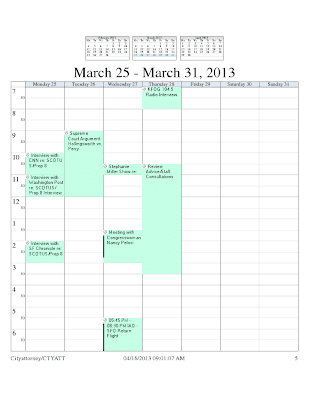 As reported in a local newspaper yesterday, San Francisco taxpayers picked up the $17,000-plus tab to send City Attorney Dennis Herrera and at least seven staffers including his press agent Matt Dorsey to attend the Supreme Court hearing on Prop 8. All of them were mere observers to the historic proceeding and Herrera didn't argue before the justices.

Dorsey told the paper that some of the staffers participated in moot courts arguing over gay marriage. My curiosity was piqued to learn if Herrera joined in those moot sessions, so I filed an Immediate Disclosure Request for his calender for March.

Lo, there isn't a single moot court listed on the City Attorney's schedule while in Washington from March 24 through the 27th.

The overwhelmingly number of events on his schedule were press interviews, including one with the San Francisco Chronicle. Four sessions with the media are listed and a ninety-minute meeting with Rep. Nancy Pelosi.

Herrera press agent Dorsey yesterday said: “Anyone who’d complain about this expense is either against marriage equality or completely ignorant about what it takes to prepare a U.S. Supreme Court case of this magnitude."

Nice lame spin by Dorsey, but wasting more than $17,000 in city dollars so Herrera could speak with the Chronicle (!?), rack up TV time and chat with Pelosi to further his political career is the issue not to mention have so much downtime on his junket.

Good government critics are not against gay marriage nor are we ignorant about all the work and time Ted Olson and David Boies have expended preparing for the case before SCOTUS. We just want proper fiscal oversight of how Herrera spends public dollars.

Posted by Unknown at 1:32 PM
Email ThisBlogThis!Share to TwitterShare to FacebookShare to Pinterest