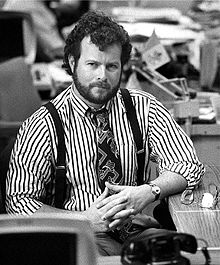 The lingering influence, including stigma and discrimination and San Francisco's status as the only city that won't allow gay bathhouses to operate, of the late San Francisco Chronicle reporter Randy Shilts, pictured, rears its ugliness again today.

Over at the Philadelphia Inquirer this morning, Don Sapatkin reports on the latest controversy stirred up by Shilts' hysterical writings and theories about the beginning of AIDS in America and the homosexual community.

Before getting to what Sapatkin writes, I'd to remind readers that some of this is old news. Noted gay social critic Douglas Crimp has gone down the Patient Zero and Shilts road, including in his book "Melancholia and Moralism: Essays on AIDS and Queer Politics". Follow this link to the Google books version of it and references to Patient Zero and Shilts.

I'm pleased to see Shilts posthumously being taken to task again and will be very curious to see if his former employer, the SF Chronicle, covers the new book or renewed debate.

The 1987 New York Post headline - THE MAN WHO GAVE US AIDS - was arguably one of the most influential of all time. "Patient Zero" - a promiscuous gay Canadian flight attendant - had spread AIDS from coast to coast. The story sparked sensational media coverage, drove a book onto the best-seller lists, pushed the "gay disease" onto mainstream America's radar screen [...]

It was also wrong - intentionally creating a scapegoat to publicize And the Band Played On, Randy Shilts' authoritative chronicle of the early years of AIDS. The book mentioned the case on just a dozen or so of its 630 pages. "We lowered ourselves to yellow journalism. My publicist told me, 'Sex, death, glamour, and, best of all, he is a foreigner, that would be the icing on the cake,' " Michael Denneny, Shilts' editor, said in an interview [...]

How the first serious examination of AIDS policy had to be sold as sordid tabloid fare is described in a new book by Philadelphia University historian Phil Tiemeyer, Plane Queer: Labor, Sexuality, and AIDS in the History of Male Flight Attendants [...]

And Shilts relays the attitude of that patient - calling him "the Quebecois version of Typhoid Mary" - as he continues to have sex with men in different cities [...]

Shilts, a reporter for the San Francisco Chronicle who died of AIDS in 1994, never actually wrote that Dugas brought the disease to the United States, saying it was "a question of debate." And he resisted using that salacious angle to promote his weighty history, his editor said. "Randy hated the idea. It took me almost a week to argue him into it," Denneny tells Tiemeyer in the new book.
Posted by Unknown at 9:41 AM
Email ThisBlogThis!Share to TwitterShare to FacebookShare to Pinterest

How *dare* you question your betters?

Oh, come now. If you had actually read, remembered, or had been willing to talk about And The Band Played On, you would perhaps have recalled that Randy Shilts had conjectured that the beginnings of the AIDS epidemic began with those sailors who, er, indulged themselves at the 1976 bicentennial celebration in New York.

The 'Patient Zero' scenario explicated by Shilts was, in my opinion, the best reportage that had been given as to the epidemiology of the disease at the time. If you would care to differ, it would be wise to give some other line of explanation for what had happened. Your current line of innuendo is insufficient to do so.

And as to the propriety of reinstituting bath houses of the sort that were au courant in 1982, may I suggest that the proprietors of such whorehouses get releases for their behavior from all of their, er, 'customers'. It would be wise, in light of the current state of STDs in the U.S.