Last week, I filed public records requests with the city attorney's office for details about how many people from the office traveled to the Supreme Court for the March 26 oral arguments on Prop 8, justification for their presence and the total cost for their travel and accommodations to the taxpayers.

On Friday, Matt Dorsey, who is the public info officer for the city attorney makes no bones about his strong opposition to timely transparency to the public, replied to my immediate disclosure request:

Please be advised that we are hereby invoking an extension of not more than 14 days from April 4 to respond to your request pursuant to the California Public Records Act. [...] The City is invoking the extension on this ground because there are a voluminous amount of records staff must search through and examine to determine if it has responsive records.

Gimme a break. As I said in my response to Dorsey, he should simply look at the photos he snapped and posted on the city attorney's photo-stream here. Dorsey chose not to reply.

The photo above, probably taken by Dorsey, shows Herrera and five staffers outside the Supreme Court and the photo below features the city attorney with his press agent Dorsey. I believe at least seven people from this office went on a junket in March to Washington, not because they were needed at the Supreme Court, but to shore up Herrera's reelection campaign for this November and future runs for higher office.

Yes, I'm aware that the city is a party to the Prop 8 case, but the city attorney was never expected to speak before the justices, as Lou Chibbaro of the Washington Blade pointed out, emphasis mine:

Dennis Herrera [...] will be in the Supreme Court chambers in Washington next Tuesday observing the oral arguments over whether Proposition 8, California’s 2008 ballot measure banning gay marriage, should be upheld or overturned.

Although Herrera won’t be delivering the arguments against Proposition 8 on Tuesday, gay rights advocates in California say he has played a pivotal role since 2004 in pushing for marriage equality in that state.

No doubt about that role of his, but why the heck are San Francisco's taxpayers footing the bill for this ambitious politician who was not needed at the Supreme Court, to go on this junket and bring at least six underlings with him including his press secretary? As Dorsey stated, answers to such simple questions will take two-weeks and who knows how much staff time.

FYI, my post Gavin Newsom disclosing his tab of $1,200 to the public and Mark Leno paying his own way are worth noting. Both Newsom and Leno took less than 24-hours to share their disclosure with me.

In my view, San Francisco needs a new city attorney, one who is fully committed to active transparency. I want my city city attorney to start regularly posting on his site monthly reports about his and any staff travel paid for by the public, and all the info requested about their SCOTUS junket tab also available on their city-funded site.

Dorsey's delaying tactic is shameful and it should not take Herrera's staff two-weeks to tell us what the price tag was for their Washington trip. 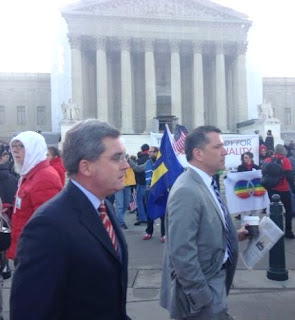 (Herrera walking in front of SCOTUS, with Dorsey on his right.) 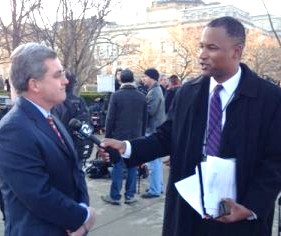 (Here we see the fantastically handsome and smart reporter David Stevenson, on the right, of KTVU interviewing Herrera.)

(While on his SCOTUS junket, Herrera's press agent got him air-time on CNN.)
Posted by Unknown at 12:43 PM
Email ThisBlogThis!Share to TwitterShare to FacebookShare to Pinterest

Thanks Michael for keeping public officials on their toes. Again like my post on Gavin Newsom article, I was at SCOTUS myself and as as Californian who watched all the Prop 8 shenanigans was so happy to see The City Attorney, and his team at SCOTUS. I honestly believe that their presence in and around the Court was imperative to the interests of Prop 8. Firstly by showing up and being present makes a bold statement, indicates the gravity of our concern and shows the Justices the lengths San Francisco as a City is going to, to ensure our interests are met and secondly the soundbytes and interviews provided outside the Court to reporters was critical, especially because of the huge part SF played in Prop 8 and marriage equality in general. Showing face as a team in my opinion was extraordinarily important. They were there as a the face of San Francisco. Remember the Court is impacted by what the populace wants too. I am grateful the City spent the money to have them there, not to mention how hard they worked and deserved the cherry on the pie.

How about the faces of the homeless queers who need a shelter in the Mission? There is not enough city dollars to open that shelter on S. Van Ness Avenue for queer homeless youths. Last Sunday, a beer bust was held to raise funds for the shelter.

Get real for a moment. Ted Olson, and if he slipped on the job David Boies would step in, was going to handle the SCOTUS arguments.

Herrera and his staffers, especially his press secretary/press agent, were never going to be called to argue.

The face of San Francisco was more than well-represented by the folks who paid their own way.

Herrera's junket need to be fully transparent. How about getting him to cough up the details about the exact cost of the junket and justify taking all the staffers?