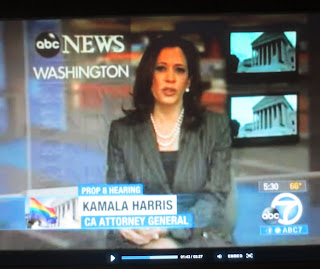 . . . to ABC News' studio, AG Harris supposedly had state business to tend to in March in DC.)

Let's follow more of the money of the fourth California elected official who went junketerring in late March when the Supreme Court was hearing arguments in the Prop 8 gay marriage case. Bear in mind, none of the four argued before the court and were mere observers to the historic hearing.

In response to my April 3 pubic records request for what I thought were standard and easily-to-locate-and-vet travel expense reports from Attorney General Kamala Harris, her office furnished me with a two-page letter yesterday and a minimal number of responsive records, from which I excerpt, emphasis added:

Good to know we didn't foot the bill for her PR blitz for herself, and who knows what she did with her six-days in DC to move up the Democratic Party ladder, but I am not happy that we are paying the bill for three of her staffers, including her publicist, for their junket to DC.

Thus far, we learn the AG's office spent $2,102 for the roundtrip airfares of her three staffers. In addition to this cost, there is the serious sunshine matter of Kamala Harris' office needs two months to locate and vet travel expense reports. It is unacceptable that any state elected official needs so many days to provide public records related to travel.

Maybe the mainstream press could take an interest in the AG office's expenses for the SCOTUS and her turnaround time on release of standard public records.

By the way, Michael Doyle of the Sacramento Bee provided great details about how our AG spent some of five-days in Washington. Thanks much, Michael and the Bee!:

On Sunday, she appeared on CNN's "State of the Union," declaring that the case is a matter "of equal protection under the law."

On Monday, the eve of the oral arguments, Harris made media phone calls and met with some reporters in person, including a pair from the Bee and from the San Francisco Chronicle.

On Tuesday, Harris appeared on PBS's "Newshour" and on MSNBC's "The Rachel Maddow Show."

On Thursday, Harris appeared on MSNBC's "Andrea Mitchell Reports" to discuss both the Proposition 8 as well as the Defense of Marriage Act case.

City Attorney Dennis Herrera, who took eight minions with him, stuck taxpayers with a $17,000-plus tab. Lieutenant Governor Gavin Newsom went solo and ran up a $1,200-plus bill for taxpayers. State Sen. Mark Leno also went solo but paid his own way.
Posted by Unknown at 2:17 PM
Email ThisBlogThis!Share to TwitterShare to FacebookShare to Pinterest