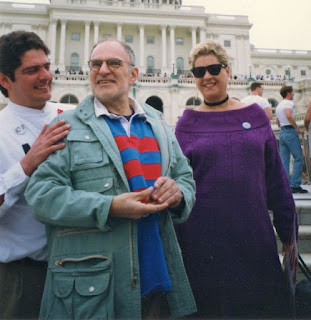 It's Throwback Thursday and I've heard talk of an ACT UP thirtieth anniversary reunion and action in the planning stages back in New York City. This jogged my memory about a very political and fun HIV protest in April 1993 at the U.S. Capitol.

A photo was snapped of myself, Larry Kramer and Vicky Torres of the Women's AIDS Resources Network, by longtime lesbian reporter Karen Ocamb. The image is the only one I have of Larry and I and it's an honor to know our life-paths at a crucial time in world health and political hatred of gays.

Here's the essay I wrote a few days before the vote in my 2014 race for San Francisco's Supervisor of the Castro District:


Winner of the Larry Kramer Peace, Love & Understanding Prize!
By Michael Petrelis
There's the Nobel, the Pulitzer, the Oscar and Time's Person of the Year, and many have been the recipients of those honors over the decades.
But there is only one individual who's won the Larry Kramer Peace, Love & Understanding Prize and that is me.
When my friend Larry made his landmark speech in early 1987 at the New York Gay and Lesbian Community Center, I was in the audience and may have been the first to stand up and speak after he finished. My proposal was that we shut down the FDA's office in Brooklyn, to send the federal government a message that we were fed up with the red tape strangling promising AIDS treatments.
What came from that speech and the brave people in that room, many of whom are dead but not forgotten, was a group and an idea that changed the world. ACT UP was born and anger was transformed into action, renewing righteous pride in queers and poz people everywhere.
My fury and passion were at such a high level in 1987 that when ACT UP held a mock awards ceremony to raise funds, I was given this ironic prize. I believe it was Ron Goldberg who penned a ditty about some of the characters populating the activist group in its infancy and I warranted mention in the song.
The lyrics went: "If you want to get over-zealous, call up Michael Petrelis!"
I've certainly lived in interesting times and never thought I'd live to see fifty-five and be partnered with my terrific husbear life-mate Mike Merrigan, and I'm damn proud to still be among the living.
Regardless of the number of votes I get in tomorrow's race for San Francisco's District 8 Supervisor, I'm declaring myself a winner.
My basic goal twelve months ago when I pulled papers at the Department of Elections and began my DIY Democracy campaign, was to get on the ballot and ask folks to vote for me, oh, and make sure there was at least one challenger to the incumbent.
That, and so much more, has been accomplished and I want to say thank you to everyone who has assisted in getting me to this point, in my campaign and my life.
Earlier today, my friend Sean Strub emailed this very touching message: "Just want you to know my fingers are crossed and I hope tomorrow is a great day for you. But remember, win or lose, you're doing something important that will have ramifications beyond your campaign. In the long run, the only thing that matters is the long run."
If he only knew how his words resonate in me and reinforce my good spirits. Yes, the long run. From the beginning of ACT UP to being a candidate for the Board of Supervisors, I've run a good race!
This photo of Larry and I, and an unknown woman, was taken by Karen Ocamb of LA Frontiers. It was snapped over the March on Washington weekend in April 1993. I was in ACT UP/DC at the time and our chapter organized Hands Around the Capitol to demand Congressional action on AIDS. Hundreds, maybe thousands, of LGBT and HIV positive people and our allies encircled the U.S. Capitol and after that action Larry delivered a trademark angry speech that roused the crowd.
If you're pissed off, Act up and #VotePetrelis!


Posted by Unknown at 11:03 AM
Email ThisBlogThis!Share to TwitterShare to FacebookShare to Pinterest