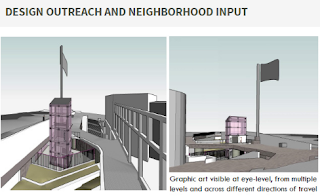 The hugely important public space at Castro and Market Streets and the City's plans to redesign the plaza in coming years deserved an open meeting months ago. It hasn't happened, but stakeholders have met amongst themselves and decided a good number of areas of agreement - for them.

For those of us who weren't in the room when the decisions were made, we need to insist on full transparency. Here are the exchanges I've had recently with the CBD and SFMTA:

I understand that you think we should hold a community meeting as soon as possible. At this point, if we did that, it would be a waste of everyone's time because we don't have very much to present to the community to respond to. I will share your concern about control of the flag with the planning committee. I imagine this will be an item on the CBD's November 10th meeting, just because the CBD board doesn't know what is happening either and they need to be updated. I will let you know if it is on the agenda or of course you can just check our website.

Thanks for your efforts Michael.

Thanks for all this info. There is quite a lot you and others have been up to, all of it probably with good intentions. However, the lack of a single community meeting at this point is a blot of poor engagement.

There's even a planning group and the CBD in lead roles here, but as far as I know the group has not held a meeting and your has not had the plaza redesigns on your agenda for discussion.

Also, and you knew this was coming, I think there should be public discussions where the flagpole and who controls it are part of the conversation from the start, well, actually the start has long been happening.

As we all know, there's never been an open meeting in the Castro by any of the controlling City and private organizations about the flagpole.

Can we once and for all just have an open meeting or two about the public space at Castro and Market, and soon too and now more putting off the discussion until you have all your ducks in a row?

You mention wanting a few more meetings, please make them open. Include the wider community now and take lack of meetings off the list of complaints against the project.

From Andrea on October 24th:

I'll jump in here to update you. As I posted on the CBD Facebook page on October 5th.
Like you, the planning group was very concerned about the short timeline given to us by MTA. We believe this is an incredible opportunity to make significant improvements to Harvey Milk Plaza, on top of the ADA improvements that MTA is making. The overall vision the planning group is currently working under is to create a more fitting tribute to Harvey Milk and the LGBT Civil Rights Movement.

Supervisor Wiener was able to negotiate with MTA to give the community a 12 month extension on this project. Since then the planning group has met once. We plan on meeting twice a month over the next couple of months to get some plans moving forward. We will be coming to the community at several points along the way with visioning exercises, artist/art selection, etc. We are also working on putting together a fundraising campaign.

The CBD did use the Castro St. Fair as an opportunity to reach out to the community. Everything was happening so quickly, we got the notice that the community had a 12 month extension just before the Fair, so the morning of the Fair the CBD just decided, "Oh, we can use the Fair to begin outreach, let's put out a flip chart at our booth and ask people for their ideas."  https://www.facebook.com/castrocbd/photos/pcb.1298569910167059/1298569410167109/?type=3&theater

We have not put out a formal press release yet, because we are not quite ready. We absolutely do want community input, we are not hiding anything, we just need a few meetings to get more organized.

I hope you understand.

I am following up on this promise of the SFMTA's to hold general public meetings about changes coming to Milk Plaza. Never received a meeting schedule from you. Did the meetings take place and are more scheduled? How exactly are you reaching out the public regarding these meetings? No one has told me about any and I've not seen info before they take place in either the Castro Courier or BAR. Both papers have covered the changes planned and community input. When are these meeting taking place this month and for the rest of the year? Please advise today. Thanks.

Hi Paul,
What's the latest news on the Milk Plaza project since we last were in touch.
Lemme know if any meetings took place in July or are scheduled for August.
Thanks.

-----Original Message-----
From: Rose, Paul <Paul.Rose@sfmta.com>
To: mpetrelis <mpetrelis@aol.com>
Sent: Tue, Jun 28, 2016 12:40 pm
Subject: RE: Elevator for Milk Plaza?
Hello,
We are currently in the very early stages for a new elevator at Castro station. See attached.
The scope of the project includes a new elevator on the south side of the station. As part of the project we will be adding other accessibility improvements including re-grading the path of travel to the new elevator,
Relocating a curb ramp to improve access, replacing sidewalk paving on the street and mezzanine levels, improving lighting along the path of travel, plus other misc improvements.
We have just begun meeting with community groups and will continue reaching out as we move forward.
Paul

Posted by Unknown at 8:27 PM
Email ThisBlogThis!Share to TwitterShare to FacebookShare to Pinterest