There were so many folks in Alley Cat Books last night in the Mission folks were standing in the aisles stretching almost at the cash register. We were there for writer and activist Sarah Schulman's public conversation about her latest book "Conflict Is Not Abuse: Overstating Harm, Community Responsibility, and the Duty of Repair," hosted by RADAR Productions.

I shared a few moments with Sarah for a photo-op, as I held my BART board campaign sign. Fyi, Sarah never endorses any folks for political office but was okay with the sign in my hand for old time's sake. We were in ACT UP/New York together during the AIDS plague years. The image doesn't equal an endorsement.

Sarah spoke at one point about how social change in America always comes from folks on the margins. Words that totally resonated with me, still here and staking out an activist position for myself outside the mainstream.

She also referenced the different approaches that were embraced in ACT UP. At a time of an epidemic, the street radicals and academics and everyone in-between who made ACT UP the force that it was in its heyday, sure as hell didn't agree on everything.

But the structure was such that affinity groups, and independents, coalesced around core health, political and social crises and the activist work got done to effect lasting, life-extending and life-saving change.

For me, it was an enlightening evening, I heard a lot of new and diverse ideas, great to see Sarah, and keep on with my BART campaign and activism in general.

Before leaving Alley Cat Books, bought a copy of Book Forum magazine to support this shop on 24th Street. Here are a few fotos from last night. 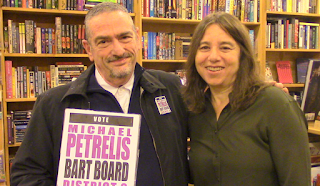 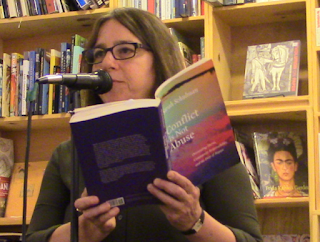 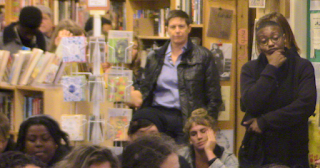 Posted by Unknown at 1:03 PM
Email ThisBlogThis!Share to TwitterShare to FacebookShare to Pinterest