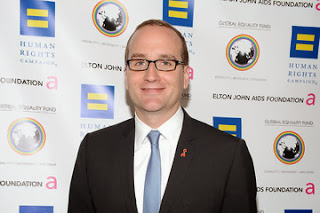 The head of the Human Rights Campaign, Chad Griffin, pictured, is one damn smart cookie and I wish he would put his brain to working with corporations and also addressing economic justice issues for lesbian, gay, bisexual and transgender Americans. There's been more sucking up to the business community at HRC than focus on money matters affecting low and moderate income LGBT people.

Yesterday's lead story in the New York Times was about the Democratic Party leaders and 2014 congressional candidates gearing up for using the need to raise the minimum wage as an election issue:


Democrats prize the issue of a minimum-wage increase because it would help address income inequality, which is galvanizing liberals at the moment and is popular with swing voters they will need in next year’s elections.

That 57 percent figure for the GOP's support of making the minimum wage more realistic startled me. Earlier this month, I tried to elicit a statement from HRC leaders about economic justice concerns and gays and all I got was silence.

Why can't the HRC, the gay division of the Democratic Party, address such concerns? I don't know if it's because of the robust six-figure salaries of the top HRC executives? Do such compensation amounts cut off their awareness of gays who don't make that kind of money? Is it because the minimum wage increase doesn't attract the attention of celebrities who appear at HRC dinners?

Thanks to the CBS News poll and the NYT, I know where many Republicans stand on increasing the minimum wage, versus the silence of HRC and no publicly stated position. Just a reminder how much HRC's top-ten executives made last year, according to their IRS 990 filing: