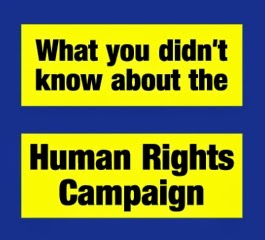 After much urging from myself and other accountability activists, the Human Rights Campaign agreed to post several years of IRS 990 filings on their site and to share the latest tax report within weeks of filing it. As a staunch critic of the organization and it's politics, I wish to laud HRC for this active commitment to transparency.

If only Evan Wolfson's Freedom to Marry group and Lorri L. Jean's Los Angeles Gay and Lesbian Center would follow HRC's transparency principles, I'd be the first to praise them for finally making their IRS 990s available on their sites.

HRC recently posted their 2012 filings on their annual reports page, one for HRC and another for the HRC Foundation. Both were filed with the Treasury Department on August 14.

Of keen interest to me are the revenue and assets for both arms of the organization, and the salary and bonus data for the top twelve leaders.

Now, for the salary and bonus breakdowns by name of the executive leadership team, starting at the highest level:. FYI, a gross-up payment is a one-time payment for things like relocation expenses. The names and numbers:

Total amount paid to these twelve persons comes to $2,873,400 for fiscal year 2012. Are these salaries and bonuses justified? No, not in my opinion and I say that because I believe HRC's leaders are part of the 1%, and addressing the economic disparities and concerns of the 99% of the lesbian, gay, bisexual and transgender community is not on their agenda.

HRC does not represent me.
Posted by Unknown at 2:35 PM
Email ThisBlogThis!Share to TwitterShare to FacebookShare to Pinterest

As Marie Antoinette would say, "FUCK THIS SHIT!"