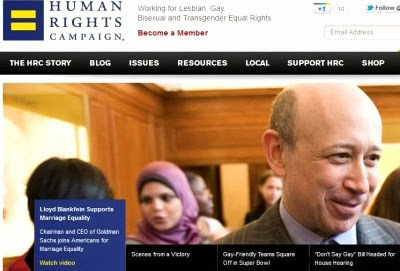 Lloyd Blankfein, member of the top echelon of the 1% and CEO of Goldman Sachs, pictured, has partnered with the Human Rights Campaign a single issue: gay marriage. Neither Blankfein and his firm nor HRC give a damn about the 47,700,000 people in this country who participated in the Supplemental Nutrition Assistance Program through September 6.

The GOP members of the House of Representatives voted this week to cut SNAP, familiarly known as food stamps, by $40 billion over the next ten-years. That comes on the heals of this bad news for economically-disadvantaged Americans, including lesbians, gays, bisexuals and transgenders, from the Center on Budget and Police Priorities:

The 2009 Recovery Act’s temporary boost to SNAP benefits is scheduled to end on November 1, 2013, resulting in a benefit cut for every SNAP household.  For families of three, the cut will be $29 a month — a total of $319 for November 2013 through September 2014, the remaining months of fiscal year 2014. That’s a serious loss, especially in light of the very low amount of basic SNAP benefits.  Without the Recovery Act’s boost, SNAP benefits will average less than $1.40 per person per meal in 2014.

Using the 3.8 percent figure from an LGBT demographer for number of LGBT persons in America, and applying it to the figure for total SNAP participants, I estimate around 1,812,000 of the participants are queer and soon will see their food security stream greatly diminished. 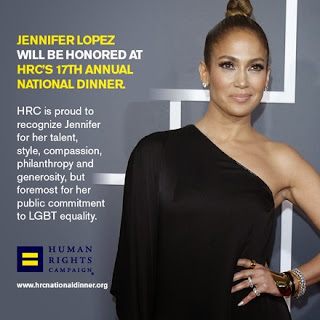 Look who is a heroine to HRC , upon whom they lavish 370 gushing words, and is a scheduled performer at their upcoming national dinner in Washington: Jennifer Lopez.

Was does HRC have to say about the cuts affecting a lot of low and moderate income queers? Let them eat wedding cakes!

I hear cackles of laughter from folks amused that I'd think HRC would actually have something to say about an economic justice matter impacting the health and wellness of many in our community. The executive leadership and board members at HRC are too damn busy sucking up to Goldman Sachs and Blankfein for gay marriage, and hiring a diva with a career in decline.

Last I read about Lopez, back in July, she was accused by the Human Rights Foundation of accepting about $10 million in performance fees from various Eastern European and Russian dictators and corrupt businessmen. She is no ally of mine, I don't care how much HRC peddles her as a strident advocate for equality.

The social safety net for millions of our fellow citizens, straight and LGBT and everything else, continues to be contemptuously shredded and HRC is silent. This silence is what an almost $50 million professional LGBT advocacy organization, paying the top executive well over $200,000 and Chad Griffin over $300,000 purchased for queers who don't attend gala dinners.
Posted by Unknown at 11:53 PM
Email ThisBlogThis!Share to TwitterShare to FacebookShare to Pinterest